Living with Wisdom - new and improved 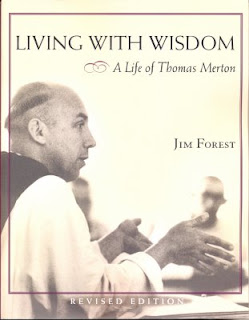 Jim Forest's revised edition of Living With Wisdom is available now. This is the Merton biography that Bob Lax said that he would give to his nieces and nephews. It has long been my favorite of the Merton bios.

Here is Jim giving his own review of the book. 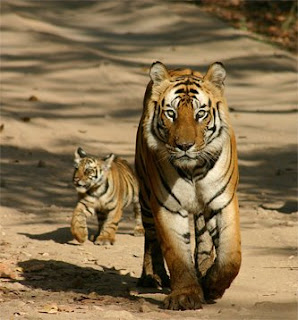 The following story, from Megan McKenna’s book, “The Hour of the Tiger – Facing Our Fears” is attributed to Merton. I hope to locate the original in his journals.

“Once upon a time there was a tiger with three young cubs. They were young and playful, but the mother tiger was trapped and killed. Eventually two of the cubs died but the other one wandered, eating grass and trying to survive. It came upon a meadow filled with sheep and goats, and even though it was very hungry he ate grass with them and settled down. He would butt heads with them, roll on the grass and sleep with them. And he grew stronger and larger. He was always hungry. Sometimes he would catch a small creature and chew contentedly on it. And sometimes he would look at what they’d taste like – but they were already like kin to him.

“Then one day a tiger appeared on the hill and the goats and sheep bleated and ran in terror, but the cub stayed. It watched as the tiger loped down the hill so graceful, so strong and free, and fast! They stood and faced each other, full grown tier and small cub. Then the cub thought to play and put down its head and butted the tiger! The tiger looked at it and took its great paw, pulled in its claws and batted the cub, sending it rolling over the grass. The cub was stunned, but did it again. This time the tiger batted him harder and he rolled farther. A third time he put his head down and ran for the tiger. This time the tiger pulled out his claws and gently but firmly hit the cub. The cub crouched and whimpered. The tiger went and picked it up in her mouth, as tigers carry their young, and walked off with the cub in her mouth – down to the river. At the river’s edge, she dropped the cub. The cub looked at itself in the water, its eyes wide. Then it looked at the tiger beside it and its eyes grew huge. It looked back and forth from the water to the tiger. Then the tiger roared, shaking the valley and filling the air, and then the cub tried it – letting out a weak growl. The tiger roared again and again, followed by the cub until they were both roaring together. Then Merton says … ‘I never knew I was that tiger cub until God came mysteriously into my life and batted me once, then again and again, then picked me up in his mouth and carried me to the river that revealed to me my real nature and then I learned to roar. I think the first time I was batted by that great paw I woke up and looked at myself truthfully. The second time I got hit with that paw, claws still held in, I became a Catholic. The third time I became a Trappist monk, and now every Advent and Lent I know that paw is coming and I’m to be swatted again, taken up into the mouth of God and dropped by the river’s edge to once again learn to roar and become more of what I was born to be.’”

Email ThisBlogThis!Share to TwitterShare to FacebookShare to Pinterest
Labels: Advent and Christmas, contemplation 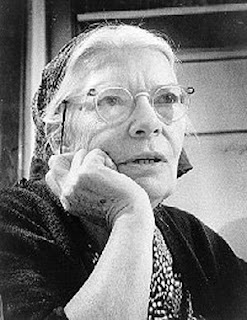 November 8:It's the birthday of Dorothy Day, founder of the Catholic Worker movement, friend and mentor of Thomas Merton (see: The Dorothy Day Connection).
She was born in Brooklyn, New York in 1897.

"People say, 'What good can one person do? What is the sense of our small effort?' They cannot see that we must lay one brick at a time. We can be responsible only for the one action of the present moment. But we can beg for an increase of love in our hearts that will vitalize and transform all our individual actions, and know that God will take them and multiply them, as Jesus multiplied the loaves and the fishes."

Jubilee - A Magazine of the Church & Her People 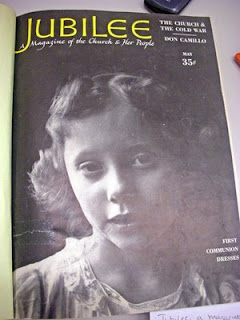 First Edition of Jubilee, May 1953
I finally found them.

Ever since I first heard about the Jubilee magazines, I have been anxious to see them. There were many reasons I was intrigued with the magazine: the name (I even named my dog, “Jubilee”), the connection to Merton and his college friends, the Catholic era in which it was published. Many of my older friends remembered the magazine with fondness - “I used to have a whole box of them” - but no one could seem to put their hands on one. I researched around and found that the libraries of many Catholic Universities had some of the magazines on hand, but I never seemed to be in the vicinity. Until now.

I find myself temporarily situated just outside of St. Louis, Missouri. Every now and then I attend the noon Mass at St. Louis University – and finally it dawned on me that those magazines had to be in the University library.

Last week I approached the librarian at the University Library, asking if they had any copies of Jubilee – a Catholic magazine published in the 1950s.

“A magazine of the Church and her peoples?” she asked.

Her computer indicated that there were at least a few, maybe more, in the Lewis Annex. So she directed me to an elevator that I should take up to 2R, then exit the elevator from the back, cross the room, and take another elevator down to the 3rd floor. There I would find my magazines: BX801.J8

I easily made my way through the maze of books and, lo and behold, there they were,on the top shelf. The full set, from the very first issue – May 1953 – to the last – July 1968 – each year bound into an orange book. Fifteen years. 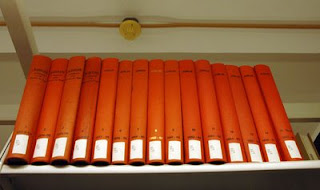 My gosh, each issue would take me a month to digest, and I only had an hour or so. I spent most of this time reading the very first magazine, May 1953, but I also quickly scanned through some of the later, and last, editions.

The photography was stunning. I assume that much (most?) of these are the work of the editor, Ed Rice. The magazine truly is “unique … because it is the first national picture magazine for a Catholic audience.” And though it is a national (American published) magazine, its scope appeared to be international, with many articles about the European Church.

The very first article of the first magazine was political, “The Church and Cold War”, with much discussion of “the heresy of Communism” (quoting Maritain).
The first edition also included an article about the men who worked New York City’s docks, the longshoremen, a poem by Robert Lax about the Cristiani Circus family, First Communion dresses that could be adapted for other occasions, an archeological story about the place in Turkey where Mary went with St. John after the Crucifixion, and 8 pages of frame-able woodcuts by artist, Walter Melmen. All for 35 cents.

Each issue contained a story for children about the adventures of Don Camillo, a young and ardent defender of the Faith. Large families are celebrated.

The art and tone changes in the later issues. Here are some photos that I took, mostly just randomly, of some of the pages. 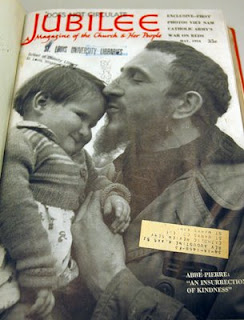 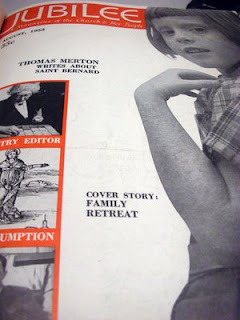 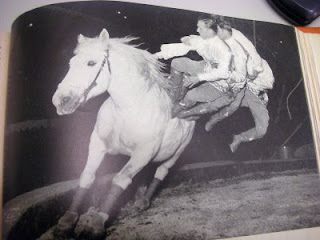 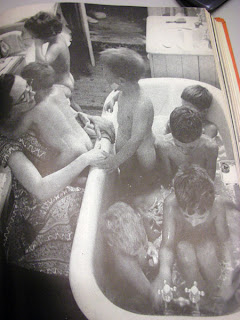 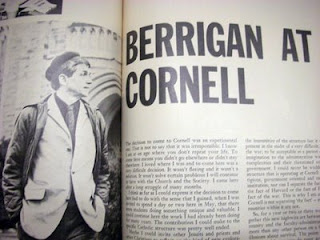 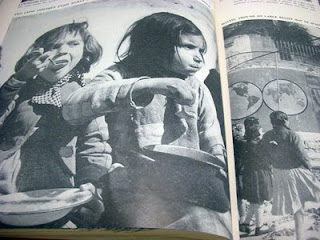 The very last page of the last issue is an advertisement for the National Catholic Reporter, which is, perhaps, the true successor of Jubilee.

I intend to go back to the St. Louis University library to read more of the Jubilee magazines. I'll probably have much more to say about them. Don't you love the name? (I wish I could identify and find that font.)

Update: there is an excellent review of Sara Maitland's book, "A Book of Silence", here. It begins:

Trying to write a book on silence sounds a bit like an artist attempting to paint the invisible. Silence is the antimatter of the book world and to choose it as a subject is courageous. But people such as Thomas Merton and Max Picard, both 20th-century Christian writers, have written brilliantly about silence in the past and it remains a great subject: mysterious, enigmatic and - in our bustling, noisy age - very countercultural.