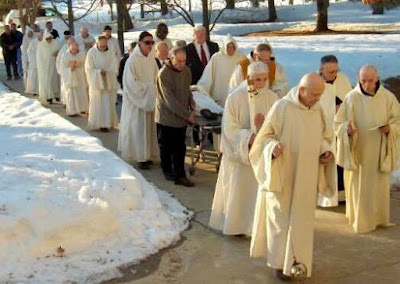 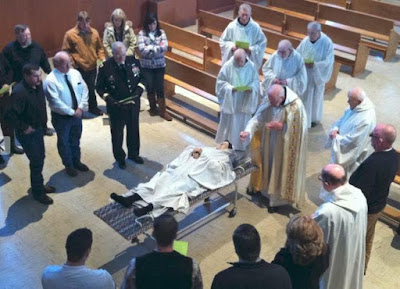 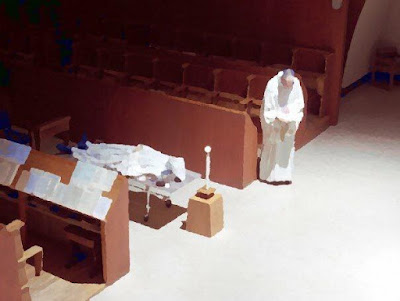 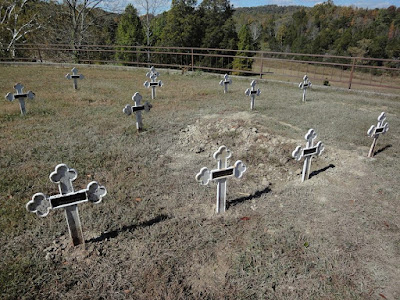 A Burial at Gethsemani
By Gregory K. Hillis

It was a surprise to enter the Abbey of Gethsemani's church and see a body lying on a bier. Br. Harold was dressed in a white cowl and his face bore no signs of being made up by a mortician. He did not look like he was sleeping. He looked like what he was: dead.

He was not alone. The community had kept vigil with Br. Harold all night, each monk taking turns at the bier, praying the psalms with him one last time, prayers he knew so well from decades of saying the Divine Office.

As the funeral Mass began, Br. Harold's bier was carried directly in front of the altar. There was no casket and his face was not covered. He simply lay there, a monk among his brother monks, albeit a now silent and unmoving participant in the Eucharistic feast.

After the Mass, his bier was carried out the doors of the church to the cemetery, filled with hundreds of identical white crosses. Here are buried monks from more than 160 years of monastic life at the Abbey. Among them is Thomas Merton, known in the community as Fr. Louis, buried beside Dom James Fox, the abbot with whom he so often clashed.

Along with the monks and members of Br. Harold's family, I processed to a freshly dug grave.

Although I've come to know quite a few of the monks of the abbey, I didn't know Br. Harold. He was already in the infirmary with Alzheimer's when I moved to Kentucky. I learned, though, that I missed out on a beautiful and simple man who breathed God in deeply, particularly when looking at a flower in bloom.

To allow Br. Harold's brother monks, family members, and friends to be near the graveside, I found a spot on an outlook near the church that stood above his final resting place. Cistercians dig their graves very deep and they bury their dead without caskets. From my perch I could see that a pillow had been placed in the grave, on which had been placed a flower. There was also a ladder leading into the grave.

Never before had the words Christians recite on Ash Wednesday-remember you are dust-been as real to me as they were at that moment.

After graveside prayers, one of the monks descended the ladder while others lifted Br. Harold from the bier. The sheet he was on had six long straps attached by which he was lowered into the ground.

As his brothers lowered Br. Harold down, the monk standing in the grave gingerly held Br. Harold's head.

There was love and gentleness in the way the monk did this. I was reminded of the care with which my wife and I would put each of our newborn sons into the crib, doing all we could to make sure that his sleep wasn't disturbed. When Br. Harold reached the bottom of the grave, I could see his brother monk almost tuck him in for his rest. He carefully laid Br. Harold's head on the pillow, placed a white shroud over his face, and then ascended out of the grave, pulling up the ladder behind him.

From my vantage point I could see Br. Harold at the bottom of the grave, and then, shovel by shovel, being covered in dirt. Truth be told, it was disconcerting to see a human body-not a body in a casket, but simply a body-be buried. But never before had the words Christians recite on Ash Wednesday-remember you are dust-been as real to me as they were at that moment.

More importantly, I had never experienced death as something beautiful before this funeral. What I witnessed was the care and love of a community for one of their brothers, a care that extended to the very depths of the grave.

On Ash Wednesday we are reminded once again of our mortality; some of us need this reminder more than others. However, there's something about my experience at Br. Harold's funeral that leads me to contemplate my mortality not as something to be feared, but as an invitation to give more completely of myself to those in my community-to my wife, to my sons, to my students and colleagues, to those in my parish, and to those in my neighborhood and city.

Br. Harold lived a life of prayer and devotion in the context of a community, staking his own existence to the existences of others. In his life, he gave himself to his community. In his illness and death, the monks in the community gave themselves to him. At his funeral I learned that to confront our mortality is to come face to face with the reality of how deeply and truly we need one another.
* * *

Gregory K. Hillis is associate professor of theology at Bellarmine University in Louisville, Kentucky. He is currently working on a book on the Catholicism of Thomas Merton.