a great mystery of poverty and darkness and strength 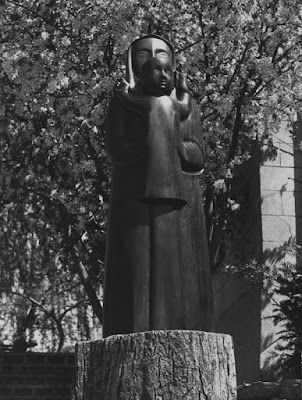 Elsewhere on this blog I have a story about this artist and sculpture and very poor scan. -


"all that is most abject, forgotten, despised and put aside"

Yesterday I found this much better photo of the sculpture.

The photo is of a statue of the Virgin Mary and the child Jesus which was photographed atop a tree stump with a tree in the background at Gethsemani Abbey. Merton took the photo, which is now at the Thomas Merton Center at Bellarmine University in Louisville.

Jaime Andrade, an artist from Quito, Ecuador created the sculpture in mahogany.

In 1958 Merton commissioned Andrade to do a statue of the Virgin Mary and child Jesus in dark wood for the novitiate library. "A statue," as he explains, "that would tell the truth about God being 'born' Incarnate in the Indians of the Andes. Christ poor and despised among the disinherited of the earth." (Merton, A Search for Solitude, p. 177.)

Merton describes its imagery as "precisely that of Louis M[assignon]" Merton interpreted the mother as an indigenous Andean who reflected "a great mystery of poverty and darkness and strength" and the child as "the Resurrection to be born from the despised peoples of Mexico and the Andes" who holds a "mystical bit of fruit" that represented salvation. She represents "all that is most abject, forgotten, despised, and put aside."

"I want to say how deeply moved I am at this idea of Louis Massignons's that salvation is coming from the most afflicted and despised. This, of course, is the only idea that makes any sense in our time." (from a letter to Jacques Maritain, 17 Aug 1960)

In seeing the Mother and Child statue take place, Merton suggested that the child hold something - a branch, fruit, or root, something indigenous to South America. Definitely not corn "because of its association with bad art".

A Life for Art : The Jaime Andrade Ecuadorian Collection