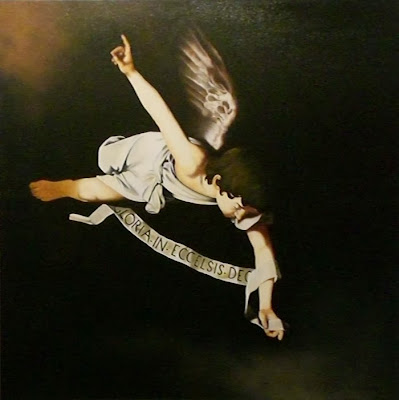 I do not think much about angels - or spirits. As a child, I suppose, I believed in my “guardian” angel. But that belief ended up with the Ouija board / Carlos Castaneda mentality of my teenage years: manufactured and superficial attitudes that could make for interesting fun, but nothing that went deep into my understanding of reality.

Yet Father Delp has called the herald angel one of the central figures of the Advent message. Who/what is this herald angel?


“Not the plaster images we have made of them but spirits of higher order of existence identified with freedom, loyalty, wisdom and love. We meet them in the opening scene on the plain of Bethlehem singing hymns of joy and praise. But that is not the mystery or the law they represent -- that is its fruit and reward. They bring tidings; they announce God’s mystery and summon the listeners to the adoration from which they themselves have risen. Their mystery is that they represent the afterglow of the divine reality they proclaim.

“That is their message and their judgment of us. For a long time now there have been no great spirits among us. They have dwindled and died out because gifted men have themselves broken the laws of the spirit. For the last hundred years intellectualism has been obsessed by the glorification of self, as if truth and reality ought to consider it an honor to be perceived and recognised by such marvelous individuals. Spirit is no longer regarded as the living reflection of a higher life ... That is why for a very long time there have been no communications worth listening to. We have had no messengers of glad tidings singing paeans of praise. Whenever such a voice has been raised it has seemed illusory or has come from agonies of suffering -- an indication of the depths of our soul sickness. ...

“Let us return to praising God, to proclaiming him joyfully and then we shall find words that are significant and valuable. We shall see visions again and penetrate mysteries. Insight and decision and the meaning of the spirit will again become matters of importance, pushing aside the empty show and the bombast of ‘presentation’ which have so much influence nowadays.” (pp. 75-76)

These are certainly words that go against the reality that is presented in the news, on TV, in the Internet.  The reality that most everyone buys into.   I admit that I have been a secular heathen for many decades, and perhaps especially during this Xmas season when things are especially confusing for me.  Is there something to that common refrain that is bantered around, even in the marketplace, during the Christmas season: "Believe"?

Throughout his meditations, Delp emphasizes again and again the need to wake up to the truth about ourselves. This is where angels keep coming in:


“For the first thing man must do if he wants to raise himself out of this sterile life is to open his heart to the golden seed which God’s angels are waiting to sow in it.” (p. 24)

“And one other thing; he must himself throughout these grey days go forth as a bringer of glad tidings. There is so much despair that cries out for comfort; there is so much faint courage that needs to be reinforced; there is so much perplexity that yearns for reason and meanings. God’s messengers, who have themselves reaped the fruits of divine seed sown even in the darkest hours, now how to wait for the fulness of harvest. Patience and faith are needed, not because we believe in the earth, or in our stars, or our temperament or our good disposition, but because we have received the message of God’s herald angel and have ourselves encountered him.” (pp. 24-25)

I kind of get this.

I kind of know within myself that there are seeds of hope and “glad tidings” that counter my own despair and lack of courage. I just never called them “angels”. It is interesting to hear someone else describe these inner voices in ways that I am not inclined to dismiss as mere figments of my own imagination, but rather as real and essential.  Angels.


“Never have I entered on Advent so vitally and intensely alert as I am now. When I pace my cell, up and down, three paces one way and three the other, my hands manacled, an unknown fate in front of me, then the tidings of our Lord’s coming to redeem the world and deliver it have quite a different and much more vivid meaning. And my mind keeps going back to the angel someone gave me as a present during Advent two or three years ago. It bore the inscription; ‘Be of good cheer. The Lord is near.’ A bomb destroyed it. The same bomb killed the donor and I often have the feeling that he is rendering me some heavenly aid. It would be impossible to endure the horror of these times - like the horror of life itself, could we only see it clearly enough - if there were not this other knowledge which constantly buoys us up and gives us strength: the knowledge of the promises that have been given and fulfilled ...

“The angels of Advent are not the bright jubilant beings who trumpet the tidings of fulfillment to a waiting world. Quiet and unseen they enter our shabby rooms and our hearts as they did of old. In the silence of night they pose God’s questions and proclaim the wonders of him with whom all things are possible ...” (p. 24)