Sometimes I find good things on Facebook. This is from Anabela Rozwadowska.

》THOMAS MERTON had a very strong attraction to Zen.

In his lecture, 'Monastic Experience and East-West Dialogue,' delivered in Calcutta shortly before he died, Merton said:

"I come as a pilgrim who is anxious to obtain not just information, not just 'facts' about other monastic traditions but to drink from ancient sources of monastic vision and experience.

I seek not to just learn more quantitatively about religion and monastic life but to become a better and more enlightened monk myself."

In Merton's book 'Zen and the Birds of Appetite' he states:

"Both Christianity and Buddhism show that suffering remains inexplicable, most of all for the man who attempts to explain it in order to evade it, or who thinks explanation itself is an escape.

Suffering is not a 'problem' as if it were something we could stand outside and control. Suffering, as both Christianity and Buddhism see, each in its own way, is part of our very ego-identity and empirical existence, and the only thing to do about it is to plunge right into the middle of contradiction and confusion in order to be transformed by what Zen calls 'the great death' and Christianity calls 'dying and rising with Christ."

In his talk in Calcutta he affirmed:

"I think that now we have reached a stage of religious maturity at which it may be possible for someone to remain perfectly faithful to a Christian and Western monastic commitment and yet learn, in depth from a Hindu or Buddhist discipline or experience. Some of us need to do this in order to improve the quality of our own monastic life."

"I do not believe that I could understand our Christian faith the way I understand it if it were not for the light of Buddhism."

I wholeheartedly agree. It is the same for me. 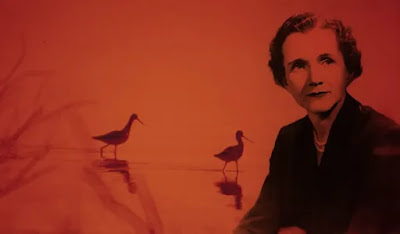 Thomas Merton’s early awakening to ecological destruction is noted in his journal Turning Towards the World (p. 274) in 1962 when he writes:

‘I have been shocked at a notice of a new book by Rachel Carson [Silent Spring], on what is happening to birds as a result of the indiscriminate use of poisons (which do not manage to kill all the insects they intend to kill). 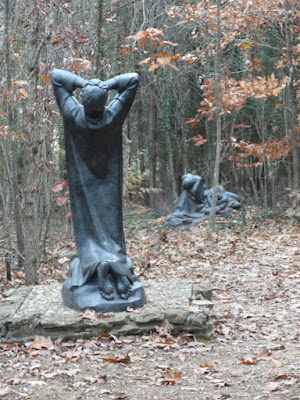 “There is one winner, only one winner, in war. The winner is war itself. Not truth, not justice, not liberty, not morality. These are the vanquished.”

we do not know the things that are for our peace

We live in crisis, and perhaps we find it interesting to do so.

Yet we also feel guilty about it, as if we ought not to be in crisis.

As if we were so wise, so able, so kind, so reasonable, that crisis ought at all times to be unthinkable. It is doubtless this “ought,” this “should” that makes our era so interesting that it cannot possibly be a time of wisdom, or even of reason.

We think we know what we ought to be doing, and we see ourselves move, with inexorable deliberation of a machine that has gone wrong, to do the the opposite. A most absorbing phenomenon which we cannot stop watching, measuring, discussing, analyzing,  and perhaps deploring!

But it goes on.

And, as Christ said over Jerusalem, we do not know the things that are for our peace.

Crisis:
a time when a difficult or important decision must be made.
"a crisis point of history"
at August 30, 2021 No comments:

Our Grief is not a Cry for War

"I think in the U.S. people had the impression that somehow the United States was helping in terms of humanitarian issues in Afghanistan. But that’s not really true. There wasn’t a marked improvement in the basics of health care, or in terms of nutrition. Education has not been available to the majority of the people, although it did get better for young girls in in the cities.

"The people who really are the “winners” in all of this — and in the history of U.S. occupation and invasion — are the military contractors, the ones who manufacture the war planes and the bombs and the drones, and the Hellfire missiles and the Apache helicopters and the material for building bases and equipping soldiers. Those are the people who win in these situations.

"I think it’s good to study everything that Pope Francis has said about war and weapons. He has called war-making futile and has asked us to lay aside our weapons. He was so blunt and clear when he spoke to the U.S. Congress, asking why anyone would give weapons to people waging wars. The answer, he said, is simple: It’s money, and the money is drenched in blood.

"But parishes are not necessarily hearing this message of peacemaking from the pulpit. I wish every parish could consider a Pax Christi chapter, would hold study groups to read more about issues of peacemaking. Another thing people can do is welcome refugees into their community, and learn from the refugees."

From the National Catholic Reporter, August 26, 2021, Q & A with activist Kathy Kelly on Afghanistan, US withdrawal and what’s next

The total abolition of war

What are we to do?

The duty of the Christian in this crisis is to strive with all his power and  intelligence,
with his faith, his hope in Christ,
and love for God and man,
to do the one task which God has imposed upon us in the world today.

That task is to work for the total abolition of war.

There can be no question that unless war is abolished
the world will remain constantly in a state of madness and desperation in which,
because of the immense destructive power of modern weapons,
the danger of catastrophe will be imminent and probable
at every moment everywhere.

Unless we set ourselves immediately to this task,
both as individuals and in our political and religious groups,
we tend by our very passivity and fatalism
to cooperate with the destructive forces that are leading inexorably to war.

It is a problem of terrifying complexity and magnitude,
for which the Church itself is not fully able to see clear and decisive solutions.
Yet she must lead the way on the road to the nonviolent settlement
of difficulties and toward the gradual abolition of war
as the way of settling international or civil disputes.

Christians must become active in every possible way, mobilizing all their resources for the fight against war.

from Jim Forest's essay, "An Army that Sheds No Blood; Thomas Merton's Response to War"

War is our enemy

“So instead of loving what you think is peace, love other men and love God above all. And instead of hating people you think are warmongers, hate the appetites and the disorder in your own soul, which are the causes of war. If you love peace, then hate injustice, hate tyranny, hate greed—but hate these things in yourself, not in another (p. 114).”

“War is our enemy (p. 115).”
“The beatitudes are simply aspects of love. They refuse to despair of the world and abandon it to a supposedly evil fate which it has brought upon itself. Instead, like Christ himself, the Christian takes upon his own shoulders the yoke of the Savior, meek and humble of heart. This yoke is the burden of the world’s sin with all its confusions, and all its problems. These sins, confusions and problems are our very own. We do not disown them (p. 134).”
-Thomas Merton, From Conjectures of a Guilty Bystander
at August 28, 2021 No comments:

Painting by Brother Tobias Haller Sometimes I find good things on Facebook. This is from Anabela Rozwadowska. 》THOMAS MERTON had a very stro... 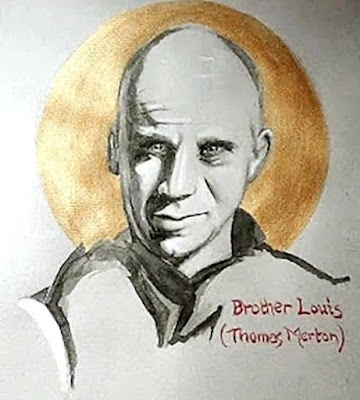