Today is the 100th birthday of Robert Lax. I've archived many of Lax's works on this site (see the label LAX), but the one I choose today is from S.T. Georgiou's collection, "In the Beginning Was Love".


the important thing for a drummer or dancer, for example (singer too), is to get to the very center of the rhythm, center of the beat << the nerve >>
~~~
to find that first: to start from it as a base, and from it all other things, even very elaborate things, develop.
~~~
the captains i like, & the people in general are those who seem to have found that center; it is not that they are either << good >> or << bad >> it is rather that they are fully alive, fully themselves, & that they, again the << best >> of them, seem to have gone through a baptism (of not just water: of fire as well) from which there is no turning back.
Robert Lax, Journal C, p. 38
from S.T. Georgiou's book, "In the Beginning was Love - Contemplative Words of Robert Lax”, #34 pp. 61-62
---
Here is a short synopsis of Lax's life from a brochure at the lax archives at St. Bonaventure University:
a lax life

Robert Lax was born in Olean, New York on November 30, 1915. The family moved between Olean and Long Island. The environs of New York City were as much home to the young Robert Lax as was the small town of Olean in upstate New York. Lax attended Columbia University in the 1930s, studying under the likes of Mark Van Doren. At Columbia Lax became fast friends with Thomas Merton, Ad Reinhardt and Ed Rice.

After college Lax worked in a variety of jobs, as a tutor, writing advertising copy, teaching college English and as an editor and writer. He worked on the editorial staff of The New Yorker, was reviewer for Time, a freelancer for Parade, and even worked in the script department of Samuel Goldwyn Studio in Hollywood. Later he was an editor for the short-lived Parisian literary journal New Story, a co-founder and editor of the Catholic culture magazine Jubilee, and the founder / publisher of the poetry broadside Pax.

Although Lax had published many poems in various magazines and journals it was not until he met the graphic artist Emil Antonucci in the 1950’s that his publishing career began to take shape. Antonucci started to publish materials by Lax in small press editions under the imprint of the Hand Press and later Journeyman Books. The most important of these early publications was Circus of the Sun (1959), a cycle of poems about Lax’s travels with the Christiani Family Circus through western Canada in 1949. Another milestone was the publication of New Poems (1962) which became somewhat of a manifesto of Lax’s simplified, pared down poetic line. Other important publications of this time were “sea & sky” (1965) and “black & white” (1966) both appearing in Lugano Review. In the mid 1960’s Lax had gone to live on the Greek island of Kalymnos & later Patmos where he was to remain for 35 years.

Because of the visual nature of his poetry Lax came to be published more and more in small press editions by graphic artists. In the 1970’s he met the Swiss photographer Bernhard Moosbrugger. Moosbrugger founded Pendo Verlag in Zurich for the purpose of publishing Lax’s writing. These Pendo volumes were issued in English with a German translation on the facing page, opening Lax’s work up to a whole new audience.

A major retrospective of Lax materials was mounted at the Neue Staatsgalerie in Stuttgart in 1985. In 1987 Lax began an archive at St. Bonaventure University. In 1990 he became the University’s first Reginald A. Lenna Visiting Professor, and during a special convocation was awarded an honorary doctorate by the University. Lax next returned to the United States in the fall of 2000. He died on September 26 of that years in his family home in Olean.

The bibliography of Lax’s published writings, and works based on this writings, runs to well over 500 items ranging from single poems, to pamphlets, to books, and includes graphic art, film, video, photography and performance art. He was as well known in art circles as he was in literary ones, and perhaps at time better known in Europe than he was in America.

Lax was brought up Jewish but was baptized into the Roman Catholic Church as a young man. Lax saw no great disparity between these traditions, but embraced each of them in their turn. Thomas Merton wrote early on of this friend, “the secret of his constant solidity I think has always been a kind of natural instinctive spirituality, a kind of inborn direction to the living God.

Today would've been Matthew Kelty's 100th birthday. He was one of the wisest persons I've had the honor to meet. As this 90 second clip reveals he was also quite a character. Happy birthday Matthew.
Posted by Morgan Atkinson on Wednesday, November 25, 2015

"At the heart of Merton’s spirituality is his distinction between our real and false selves. Our false selves are the identities we cultivate in order to function in society with pride and self-possession; our real selves are a deep religious mystery, known entirely only to God. The world cultivates the false self, ignores the real one, and therein lies the great irony of human existence: the more we make of ourselves, the less we actually exist."
at November 22, 2015 5 comments:

Email ThisBlogThis!Share to TwitterShare to FacebookShare to Pinterest
Labels: authenticity 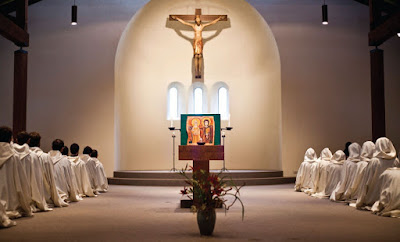 “There must be monasticism in the twenty-first century!” So said a friend not long ago. Both his implicit protest and his conviction make sense. The landscape of the spirit in the West would be torn and lacking if the monastic way vanished in our time. Even for those who don’t share the same faith, it is a sign—of concentrated intention, deliberate simplicity, ancient truth, refinement of feeling, unconditional willingness to live together. Every real monastery is an ascent. “Who are you?” they ask. And what do we wish? The Bible is a book of signs, from the rainbow above the Ark to the “signs and wonders” of The Acts of the Apostles. We can’t seem to do without signs to orient our lives: landmarks in the air. The monastic community of Bose, terrestrially speaking not quite a two-hour drive toward the mountains from both Turin and Milan, knew from its beginnings fifty years ago that it too must be a sign. “Try … to make the community a sign,” reads the Rule of Bose, its foundation document. “Keep watch over its authenticity, and do not let it become a dull, colorless institution.” 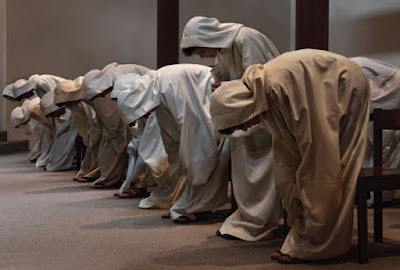