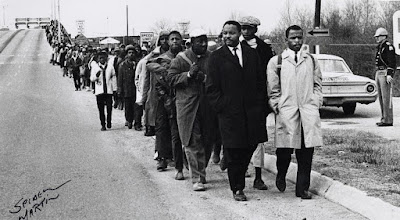 Former President Clinton, in his eulogy for John Lewis at the funeral yesterday, mentioned that Lewis had Merton's autobiography (The Seven Storey Mountain) with him, but apparently it was another Merton book, New Seeds of Contemplation.

Merton at the Selma March
March 7, 2020 marks the fifty-fifth anniversary of the 1965 “Bloody Sunday” voting rights march from Selma to Montgomery, Alabama, a key turning point in the struggle for civil rights for African Americans. A little-known detail about that event was that Thomas Merton was present both in spirit and in word. Leading the march was 25-year-old John Lewis, chair of the Student Nonviolent Coordinating Committee (SNCC), who was expecting to be arrested for participating in this “illegal” demonstration and came prepared for jail, with a backpack containing a toothbrush and toothpaste, an apple and an orange, and two books to read while incarcerated, one of which was Thomas Merton’s New Seeds of Contemplation. ...

For the complete reflection see https://johnlewis.house.gov/media-center/press-releases/rep-john-lewis-pope-francis-address-congress

At the October 2019 wake at the U.S. Capitol for another African American congressman and civil rights icon, Rep. Elijah Cummings of Maryland, former Maryland governor Martin O’Malley encountered Rep. Lewis. Recalling having been told by Lewis on a previous occasion about New Seeds in his backpack, and “Remembering our affinity for Merton, I ask the congressman, ‘What do you think Thomas Merton would say to us as Americans today if he were alive?’ After only a brief moment of reflection, he looked me straight in the eye and said, ‘“Be faithful.” He would say, “Be faithful.”’ And so it is,” O’Malley concludes: “the clock ticks on, and the reputations of some men soar even as their abilities vanish before our eyes. But some things never die. Some ideas refuse to be buried. Justice. Dignity. Generational progress. The truth that we are all in this together” – ideals shared by the civil rights leader and the monk whose printed words accompanied him on that historic day fifty-five years ago, and whose spirit, Lewis believes, continues to summon Americans to be faithful to their truest principles and their best selves. 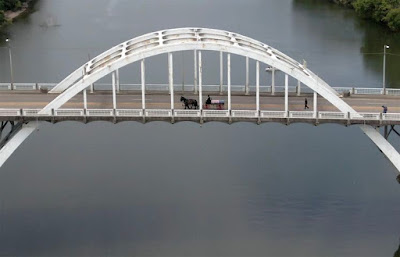 if Thomas Merton could find his way and keep his faith and believe in the future, he, John Lewis could too ... 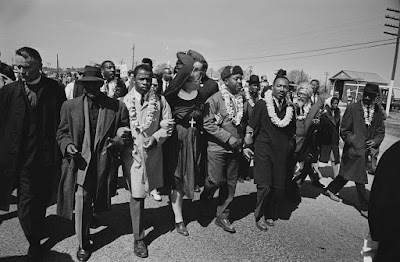 In a funeral eulogy delivered today in Atlanta, former President Clinton spoke of Lewis' humanity, strength and his unwavering belief in a future without racism. His eulogy included a reference to Thomas Merton:

Then, there was Bloody Sunday, he figured he might get arrested. And this is really important for all the rhapsodic things we believe about John Lewis, he had a really good mind and he was always trying to figure out how I can make the most out of every single moment. So he’s getting ready to march from Selma to Montgomery, he wants to get across the bridge. What do we remember? He cut quite a strange figure: He had a trench coat and a backpack. Now, young people probably think that’s no big deal but there weren’t that many backpacks back then. And you never saw anybody in a trench coat looking halfway dressed up with a backpack. But John put an apple, an orange, a toothbrush, toothpaste to take care of his body because he figured he would get arrested. And two books, one by Richard Hofstadter on America’s political tradition to feed his mind, and one, the autobiography of Thomas Merton, a Roman Catholic Trappist monk who was the son of itinerant artists making an astonishing personal transformation. What’s a young guy who’s about to get his brains beat out and planning on going to prison doing taking that? I think he figured that if Thomas Merton could find his way and keep his faith and believe in the future, he, John Lewis could too. 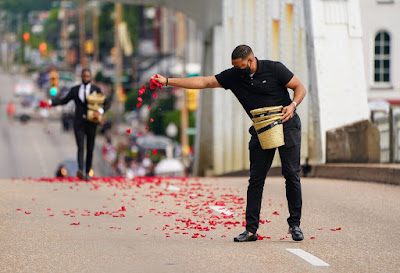 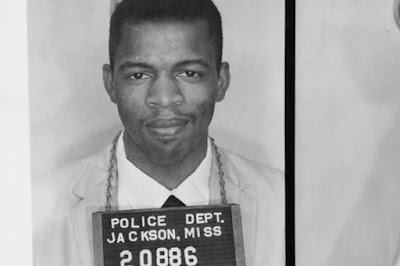 "one of the most moving speeches I have ever heard in all my years in Congress...It was amazing that the Pope mentioned the Selma-to-Montgomery march because...I carried one of Thomas Merton's books in my backpack"

Here is the full statement from John Lewis:

"The Holy Father, Pope Francis of the Holy See, delivered a powerful message to Congress and the American people today. In his humble, gentle way he used his authority to encourage us to simply do what is right to protect to dignity of all humankind.

"He said: "All political activity must serve and protect the good of the human person and be based on respect for his or her dignity ... Politics is ... an expression of our compelling need to live as one, in order to build as one the greatest common good.

"These words and ideas speak to the center of our work as member of Congress and to the importance and vitality of our roles as individual citizens. Pope Francis delivered one of the most moving speeches I have ever heard in all my years in Congress. I loved the way he used the life and work of President Abraham Lincoln, Dr. Martin Luther King Jr., Dorothy Day and Thomas Merton as the basis for his lesson for all of us.

"Though I was reluctant to openly shed tears, I cried within to hear his words. I was deeply moved to realize I had a connection in some way with some of those he mentioned. When TIME magazine, years ago, did a story on "living saints", they actually included Dorothy Day and I in the story. Also Thomas Merton was a monk whose words I studied during non-violence training in the Civil Rights Movement. It was amazing that the Pope mention the Selma-to-Montgomery march because during the first attempt to march to Montgomery, now known as Bloody Sunday, I carried one of Thomas Merton's books in my backpack.

"Pope Francis spoke to the heart and soul of Congress and America. It is my prayer that members of Congress will heed his simple call to respect the dignity and divinity of every human being then we would be better servants of the American people, this would be a better country, and a better world."