This landscape of “mountains” and “valleys” speckled with glittering stars is actually the edge of a nearby, young, star-forming region called NGC 3324 in the Carina Nebula. Captured in infrared light by NASA’s new James Webb Space Telescope, this image reveals for the first time previously invisible areas of star birth.
Credits: NASA, ESA, CSA, and STScI
Learn more about this image.

Ilia Delio (The Hours of the Universe) talks about “the new person” emerging in evolution, who is embracing pluralities of gender, race and religion; who is called into a “new type of consciousness where things are first seen together and then as distinct within this togetherness.” (The Hours of the Universe, p. 98.) She affirms that we are being rewired for belonging to the cosmic whole. We are more and more aware that we are one earth community; we have a planetary consciousness that, according to Ilia, evokes a deep concern, especially in younger generations, for the planet and for those who are impoverished or marginalized. She calls younger generations – many of you – “digital natives” because they (you) were “born into a networked world and … think across lines of relationships.” In fact, Ilia says, “we are beginning to see that systems in nature do not work on principles of competition and struggle but on cooperation and sympathy.”

An excerpt from the acceptance speech by Marie Dennis chosen as the “Teacher of Peace 2022” by Pax Christi USA at its 50th Anniversary National Conference, August 7, 2022.

60 years ago near the anniversaries of Hiroshima and Nagasaki, Thomas Merton wrote the Mayor of Hiroshima, Japan:"In a solemn and grave hour for humanity I address this letter to you and to your people... The events or August 6th 1945 give you the most solemn right to be heard and respected by the whole world. But the world only pretends to respect your witness. In reality it cannot face the truth which you represent. But I wish to say on my own behalf and on behalf of my fellow monks and those who are like minded, that I never cease to face the truth which is symbolized in the names of Hiroshima, Nagasaki. Each day I pray humbly and with love for the victims of the atomic bombardments which took place there. All the holy spirits of those who lost their lives then, I regard as my dear and real friends."https://merton.bellarmine.edu/s/Merton/item/59475
at August 08, 2022 No comments:

I am the utter poverty of God 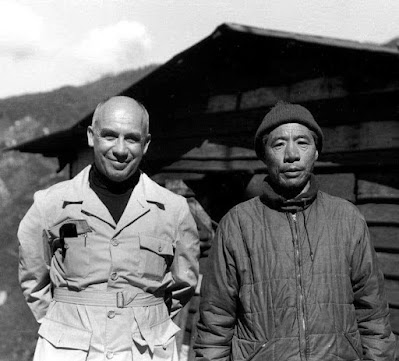 This came to me via the Facebook International Merton Society site, who got it from the "Spiritual ... But Not Religious" blog site.

...The most influential contact Thomas Merton made was with the Buddhist teacher, Chatral Rinpoche, a monk who had spent more than thirty years in the solitary contemplation that was Merton's only real home in this world.
It was Chatral Rinpoche who identified Merton as a pratyekabhudda, and with whom Merton would take a variant of the Boddhisatva's vows, in which he dedicated himself to do all he could to reach enlightenment for the benefit of all beings, in this lifetime or the next.Merton was already far along that path, as the following entry written in his journal several months before he set out to Asia demonstrates:"I am the utter poverty of God," he wrote.

"I am His emptiness, littleness, nothingness, lostness.

"When this is understood, my life in His freedom,the self-emptying God of me, is the fullness of grace.Love for all, hatred of none, is the fruit and manifestationof love of God, peace and satisfaction."Chatral Rinpoche identified Merton as an independently enlightened being. In doing so, they highlight the Buddhist acceptance of ultimate teachings, irrespective of what religious or spiritual tradition in which they arise.The Buddha consistently said that his path was not the only path to enlightenment, and that every being must find his own path. His teachings, he noted, were meant only to be guides, and he encouraged all to investigate for him or herself the truth of what he said, rather than merely taking his word for it."