This week is marked by two significant dates from 1945, the use of the atomic weapons first on the city of Hiroshima on August 6th and three days later on Nagasaki. The loss of life and the dawn of the availability of weapons of mass destruction were marked by those distant August days. If you look back to the old Roman Missal and read the Introit for the Mass of the Transfiguration, August 6th, you will find these words:

The Psalmist who wrote Psalm 76 could not have appreciated just how awful was that prediction for there is something deeply uncomfortable and prophetic in those few words. Now, some 74 years on, we live with an uneasy stalemate.

The days that led up to the morning of August 6th gave rise to a long poem,  "Original Child Bomb", written in 41 verses in 1962, by Thomas Merton. He recounts in a methodical, almost pedantic, manner the decisions that led up to the final go-ahead for its use.

“On Sunday afternoon ‘Little Boy’ was brought out in procession and devoutly tucked away in the womb of Enola Gay. That evening few were able to sleep. They were excited as little boys on Christmas Eve. (26)

He goes on to say that- “… they reached Hiroshima and started the bomb run. The city was full of sun. The fliers could see the green grass in the gardens. No fighters rose to meet them. There was no flak. No one in the city bothered to take cover.” (31).

Ever since that terrible event, and the second attack on Nagasaki three days later, the moral absolutes have been debated. It is not without significance that Merton wrote his poem in 1962, the year of the Council and the year of the Cuban missile crisis. He concluded his writing with these lines.

“Since that summer many other bombs have been ‘found’. What is going to happen? At the time of writing, after a season of brisk speculation men seem to be fatigued by the whole question”. (41)
There is now no way of knowing what was said in those early morning  moments by many voices.  Now no way of hearing their words  (of greeting  or recrimination) traded across a room or in passing down the street.

Now no way of smelling the scent of flowers from garden shrubs  or from potted plants  rivalling the staleness of sleep with breakfast done.

Now no way of touching the outstretched hand of the child walking with her Mother just after eight that blue skied hour.         Hiroshima Day, dark brightness in the bright darkness, Night Hiroshima.

Only in the agony of that explosive instant when on ground, razed of buildings, human forms that moved just disappeared.

Only then as the fireball rose and the firestorm spread outwards did voices of children cry “Atsui, Atsui” -it is hot-  but without response.

Only then  did silent shuffling ghosts leaving the stricken town hold out their savaged hands softly howling “Tasukete kure ” - help, please but none came. We begin to realise the transfigured Christ, fire-caught that August morning of fearsome Dawn.

There are times in our lives when an event is transformative, when something happens that makes a difference; there is a step-change and the person we were before is radically different from the person we become. There is no going back.

Of all the events recorded in the Gospels, the account of Peter, James and John with the Lord on Mount Tabor , just west of the Sea of Galilee, given to us by Matthew, stirs the imagination. There, on that rocky outcrop, the appearance of the man from Nazareth was transformed and momentarily his three companions were dazed by the event and covered their faces. Something of the glory and radiance of God was revealed to them, however briefly. Did they understand its significance? I doubt it. Did it affect their lives and their perception of the nature of Jesus? Most certainly it did. That moment in time was linked with an event that was yet to happen, the Resurrection of the Lord after his crucifixion at Passover. “Don’t tell anyone just yet”, they were told, the significance of such an event would be lost on those who had yet to walk the journey that led to it.

Now and then, we too are transformed, transfigured even, and the dwelling of God in us is allowed to shine through. Others see it, and are grateful for our being alongside them. Others feel it, in the gentleness of our touch or the carefulness of our hug. Others value it when we truly listen to their words of joy or pain and share with them times of great personal happiness or the darkness of desolation. 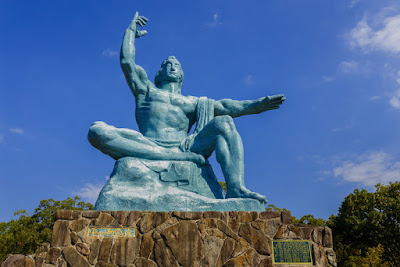 A moment of silence was observed at 11:02 AM, the exact time on August 9, 1945, when a plutonium cored atomic bomb, code named "Fat Man" dropped by a U.S. bomber exploded over the southwestern Japanese city. This bombing happened 3 days after the United States dropped the world's first deployed atomic bomb on Hiroshima.

The ceremony was held in Nagasaki's Peace Park, before the Peace Statue.

The sculpture of the seated man has his right arm pointed to the sky, representing the threat of an atomic bomb being dropped, and his left arm is extended horizontally, symbolizing peace. The statue's eyes are closed in mourning.

Other louie postings on Nagasaki & Hiroshima are here:

The Bombing of Nagasaki: The Untold Story (2018)

Feast of the Transfiguration (2015)

The bombing of Hiroshima and the Feast of the Transfiguration (2009) 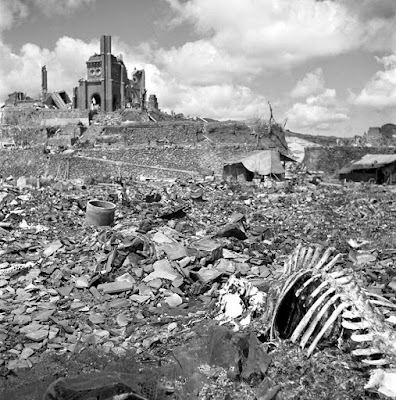 in the background, the remains of the cathedral of Our Lady of the Immaculate Conception

As soon as the planes had passed, Mrs. Nakamura started back with her children. They reached home a little after two-thirty and she immediately turned on the radio, which, to her distress, was just then broadcasting a fresh warning. When she looked at the children and saw how tired they were, and when she thought of the number of trips they had made in past weeks, all to no purpose, to the East Parade Ground, she decided that in spite of the instructions on the radio, she simply could not face starting out all over again. She put the children in their bedrolls on the floor, lay down herself at three o’clock, and fell asleep at once, so soundly that when planes passed over later, she did not waken to their sound.