deeds of no purpose

If you're thinking of New Year's resolutions, you might consider this:

"All the Mahayana sutras give the greatest significance to the attainment of this "life of no-purposiveness". The lilies of the field are living it, so are the greatest spiritual leaders of the world. And all the "Great Vows" of the Bodhisattva grow out of it; his vows are no vows in the ordinary sense of the word."

- from "The Training of the Zen Buddhist Monk", by Daistez Teitaro Suzuki, p. 118 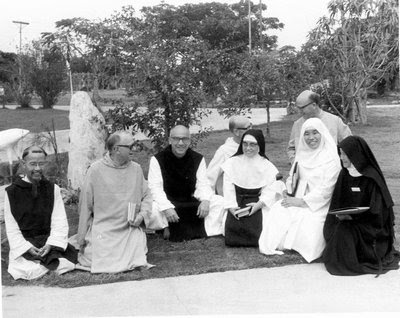 Fr. Louis (Thomas) Merton (center, white and black habit) and Fr. Jean Leclercq (to his right) at the December 1968 meeting in Bangkok.

If there is a feast day for Father Louie, December 10th is it. This is the day, in 1941, that he arrived at the Abby of Our Lady of Gethsemane to begin his life as a Trappist monk. Twenty seven years later, on this day, he died in Bangkok Thailand while participating in a monastic conference.

I have written several times on this blog about Merton’s death. I think that my favorite is the picture poem that Bob Lax drew when he heard that his friend had died.

On that last day, Merton was speaking to the “Meeting of the Monks of Asia”, a gathering that was organized by AIM (Aide a l’Implantation Monastique). The event had brought together seventy monks, nuns, and scholars from twenty-two countries in Asia, America, and Europe, along with journalists and television crews from three countries.

Merton was not especially looking forward to the talk. The journalists and camera crews - his very notoriety - were what he wished to avoid. In fact, the photographers, journalists, and TV crews did, in fact, focus on him, and he was the only person at the conference who was treated that way.

Merton's talk was about the future of monasticism. Not necessarily the monasticism that is tied to an institution (what happens when the institution collapses?), but to the monk/man who knows the score. The monk who takes up a critical attitude toward the world and its structures, who says, in one way or another, that the claims of the world are fraudulent, who attains a liberty that no one can touch and who lives by the law of love.

I thought of Merton's speech this morning while watching Barack Obama accept the Nobel Peace Prize in Oslo. His speech, like Merton's, was about the future.

"I do not believe that we will have the will, or the staying power, to complete this work without something more – and that is the continued expansion of our moral imagination; an insistence that there is something irreducible that we all share." 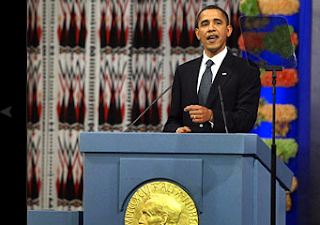 Below are some posts where I have discussed Merton's death in this blog. It is an eclectic collection, as is this entire blog.

The Funeral of Thomas Merton - a white celebration (December 17, 2008)

"The language used by Zen is therefore in some sense an antilanguage, and the “logic” of Zen is a radical reversal of philosophical logic. The human dilemma of communication is that we cannot communicate ordinarily without words and signs, but even ordinary experience tends to be falsified by our habits of verbalization and rationalization. The convenient tools of language enable us to decide beforehand what we think things mean, and tempt us all too easily to see things only in a way that fits our logical preconceptions and our verbal formulas. Instead of seeing things and facts as they are we see them as reflections and verifications of the sentences we have previously made up in our minds. We quickly forget how to simply see things and substitute our words and our formulas for the things themselves, manipulating facts so that we see only what conveniently fits our prejudices. Zen uses language against itself to blast out these preconceptions and to destroy the specious “reality” in our minds so that we can see directly. Zen is saying, as Wittgenstein said, “Don’t think: Look!”"

Friends and the Church

"If I stay with the Church it is out of a disillusioned love, and with a realization that I myself could not be happy outside, though I have no guarantee of being happy inside either. In effect, my 'happiness' does not depend on any institution or any establishment. As for you, you are part of my 'Church' of friends who are in many ways more important to me than the institution".

Merton in a letter to Czeslaw Milosz
at December 06, 2009 No comments:

Email ThisBlogThis!Share to TwitterShare to FacebookShare to Pinterest
Labels: Catholicism 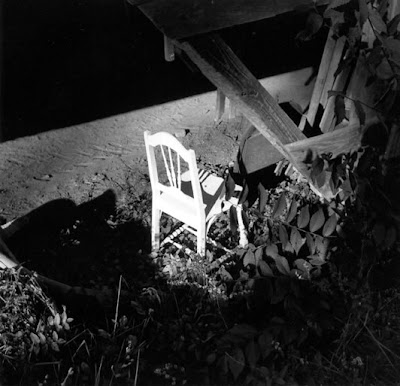 "It is important to remember the deep, in some ways anguished seriousness of Advent, when the mendacious celebrations of our marketing culture so easily harmonize with our tendency to regard Christmas, consciously or otherwise, as a return to our own innocence and our own infancy ...
"But the Church, in preparing us for the birth of a "great prophet", a savior and a king of peace, has more in mind than seasonal cheer. The Advent mystery focuses the light of faith upon the very meaning of life, of history, of man, of the world and of our own being. In Advent we celebrate the coming and indeed in some ways the presence of Christ in our world."
(from "Seasons Of Celebration")

"If we accept God's revelation of Himself in the infant of Bethlehem. we must also recognize that this acceptance has grave consequences for our lives. It means accepting One for whom there is no room in the 'inn' of an excited and distraught world. We see this in the disturbing symbol of that census which brings 'the whole world' into the books of the Roman imperial power. If we accept this infant as our God, then we accept our own obligations to grow with Him in our world of arrogant power and travel with Him as he ascends to Jerusalem and the Cross, which is the denial of power."
(from "Love And Living")

HT to Frank G. for these quotes.