Rear View of the Hermitage in Heavy Snow 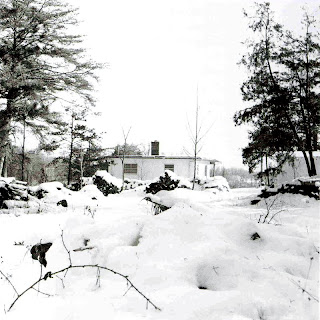 The Funeral of Thomas Merton - a white celebration 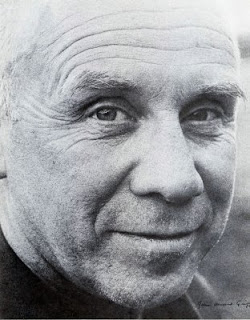 photo by John Howard Griffin
"Earth's a good place to die from." - Ron Seitz on the day of Merton's funeral, December 17, 1968.

"Abbot Flavian and several monk went to Louisville to receive Tom's body. They then took it to New Haven (near the Abbey of Gethsemani) where
the coffin opened
to his brothers bending close -
silent now those lips
the body was identified.
"The casket was closed again, this time for good, then taken to the Abbey of Gethsemani. Rather than a morning funeral as scheduled in Brother Pat's telegram,the liturgy and burial services were pushed back till late afternoon. ...
... What Tom especially wouldn't want in death - some kind of incense-wailing over his coffin, all that weepy mourning, sad tears and sinking gloom, the black of it. And why I'm sure (and glad) that his brother monks gave him a white celebration ...
"So, down there in the Abbey church for Tom's funeral Mass there would not be any of us "interrupting the smiles with our sobs" because his brothers, the good monks were Hallelujahing! The Abbot welcoming us with open arms, smiling, "Lord no. Won't be any of that sadface weeping. We're not that way about it down here. - Father Louis' death ... Why, we'll be coming out white and joyful!"
- Ron Seitz, SONG FOR NOBODY

And from Matthew Kelty:

“It was perhaps at his death, and the funeral and burial following, that the true dimensions of Gethsemani’s relations with Father Louis became manifest. It is rare for a monastic funeral to have such an impact as his had. It is not that in the death of other monks we were less concerned with love, for there is genuine love here, but the intensity of this particular experience escaped no one. And it was as the man himself, a combination of contradictions. For it was very sad and grief-ridden, but at the same time something brim-filled with joy and a kind of rapture. I have never in my life assisted at such a joyous funeral; it was more of a wedding celebration! And yet the anguish of knowing that he was no longer with us was a great weight on the heart. All in all, it was a community experience of great love, a testimony to the great mystery of love among us in the power of Christ, a love hidden in some way, yet there, as the great inner reality, the core of our life together. The comings and goings, the brightness and the dullness, the stupid and the silly as well as the brilliant and the accomplished – the whole fabric of the life of day to day was laid bare, and there for all to see was this glorious presence of love behind it all, beneath it all. It was evident that the man loved us. And it was evident that we loved him. And this love is the evidence of the presence of Christ.
“… he was a kind of dividing spirit, a sign spoken against, a sort of question demanding an answer. Thus, he raised issues, and there was no way out but to reply one way or other. In this he was unsettling, disturbing, not comfortable to live with. Put in other words, there was a kind of truth about him that got under your skin, into your heart. He belonged to nobody, free as a bird. He could not be categorized, labeled, pigeonholed. And he had vision … "
- from an essay, “The Man” by Matthew Kelty, included in the book THOMAS MERTON - MONK, p. 34 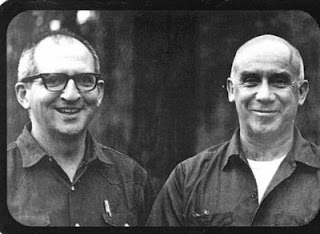 Brother Patrick Hart and Thomas Merton on Sept. 9, 1968: 'Merton remembered that he had some unused film in his camera, and so he began at once taking pictures of the three of us. We took turns with the camera so that we had photographs taken with him in front of the hermitage and in the surrounding woods.'

Brother Patrick Hart’s 40 year reflection of a last Mass with Merton was published in the Courier Journal last week.

... We all joined in the Prayers of the Faithful; Phil read the Epistle, and Merton read the beautiful Gospel narrative of the Good Samaritan, after which he surprised us with a brief but deeply moving homily. He compared himself to "the traveler" who had been attacked by robbers on the road to Jericho, and was then left half dead along the way. He went on to describe how each of us in our own way had been Good Samaritans to him, helping him "to get out of the ditch." He embarrassed us by expressing his appreciation for all we had done for him and concluded by saying he was offering this Mass for our intentions. Before Communion he embraced each of us with the "Kiss of Peace." We received under both Species, and I remember he addressed us personally, using our first names: "The Body of the Lord, Phil, etc." It was as beautiful and as meaningful a Mass as I have ever experienced. ...

The entire reflection is published in the Courier Journal. 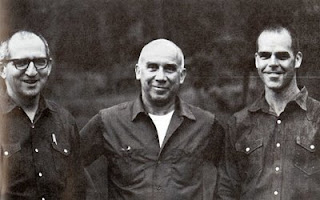 Email ThisBlogThis!Share to TwitterShare to FacebookShare to Pinterest
Labels: Catholicism

the monk/poet's journey toward silence 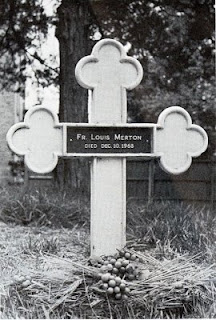 On the 40th anniversary of Merton's death, the Louisville Courier Journal published the following reflection by Frederick Smock, chairman of the English Department at Bellarmine University.

Much of a monk's life is spent in silence. Much of a poet's life is spent in silence, too -- a poet spends a fraction of his time actually writing poems. Merton was both a monk and a poet, and thus well-acquainted with silence. Like meditation, and like prayer, poetry is surrounded by silence. Poetry begins and ends in silence. Silence is also inherent within a poem, like the silences between notes in music. As the greatChinese poet Yang Wan-li said, a thousand years ago, "A poem is made of words, yes, but take away the words and the poem remains."

Still, when we think of silence, we do not necessarily think of Merton. He was a voluble man, and a prolific writer. He continues to publish, posthumously. He always seems to be speaking to us. Bookshelves groan under the accumulating weight of his oeurvre. However, late in his life, Merton lamented the fact that he had written so many editorials, and not more poems and prayers -- forms that partake of silence. "More and more I see the necessity of leaving my own ridiculous 'career' as a religious journalist," he wrote in his journal (Dec. 2, 1959). "Stop writing for publication -- except poems and creative meditations."

"What do I really want to do?" Merton asked himself, in his journal (June 21, 1959). "Long hours of quiet in the woods, reading a little, meditating a lot, walking up and down in the pine needles in bare feet." What a man commits to his journal is, at once, the most private and the most authentic version of his self. Books written for public consumption are not errant, just not as heartfelt. In his journal for the Feast of St. Thomas Aquinas (March 7, 1961), Merton wrote, "Determined to write less, to gradually vanish." He added, at the end of that entry, "The last thing I will give up writing will be this journal and notebooks and poems. No more books of piety."

Life is a journey toward silence, and not just the silence of death. Youth talks a lot --is noisy. Old age is reticent. There is so much to consider, after all. Older men tend to hold their tongues. They know the wisdom of forbearance. To have seen many things is to reserve judgment. In this modern era, when news and politics are dominated by endlessly talking heads, silence becomes a precious commodity. The mere absence of speech sounds like silence. But true silence is a presence, not an absence. A fullness. A richness that depends for its worth on the purity of intent, not just the lack of distractions.

In a late journal entry (Dec. 4, 1968), Merton wrote of visiting the grand stupas of Buddha and Ananda at Gil Vihara, Sri Lanka. "The silence of the extraordinary faces. The great smiles. Huge and yet subtle. Filled with every possibility, questioning nothing, knowing everything, rejecting nothing...." Speaking of the figure of Ananda, Merton concluded, "It says everything. It needs nothing. Because it needs nothing it can afford to be silent, unnoticed, undiscovered." He also photographed these statues, focusing on their beatific serenity.

When we are silent, we can hear the wind in the trees, and the water in the brook, and is this not more eloquent than anything that we ourselves might have to say? Of living in his newly-built hermitage, Merton wrote in his journal (Feb. 24, 1965), "I can imagine no other joy on earth than to have such a place and to be at peace in it, to live in silence, to think and write, to listen to the wind and to all the voices of the wood, to live in the shadow of the big cedar cross, to prepare for my death...."

Praise of silence runs throughout Merton's meditations. For just one example: of his teaching of the novices at Gethsemani, he wrote (July 4, 1952), "Between the silence of God and the silence of my own soul stands the silence of the souls entrusted to me."

Certainly, since his death, Merton has been silent -- if not silenced. There is also the soft rustle, just out of hearing, of the poems and prayers he did not live to write.

Frederick Smock is chairman of the English Department at Bellarmine University. His recent book is Pax Intrantibus: A Meditation on the Poetry of Thomas Merton (Broadstone Books).

"Action is an Epiphany of Being" 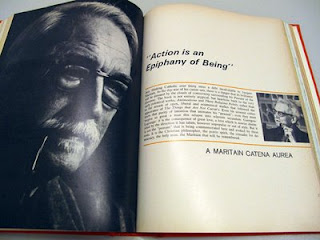 Last week I was rummaging through the Jubilee magazines in the archives of the St. Louis University library, and I stumbled upon an article about Jacques Maritain. It was titled: “Action is an Epiphany of Being”. The article was a collection of Maritain quotes from different sources, and photos that were taken during Maritain’s visit with Thomas Merton. The photos were probably taken by John Howard Griffin, but I didn’t notice an acknowledgement.

Though I'm captivated with the title of the article: "Action is an Epiphany of Being", I can’t remember any of the quotes exactly. But what I came away with was the notion that Truth – the rhyme and reason of our existence – is, in fact, knowable, and that the Catholic Church can, in some way, relay this truth among the peoples of the ages. One does not need to be an intellectual or even studious, to be able to grasp this truth, but once grasped, one’s life would be changed (or perhaps “charged” is a better word).

I don’t believe that the Catholic Church is the only way that one can come to this truth, Merton’s conversations with Asian religions showed his awareness of other ways. But to his last day, Merton remained steadfastly grounded in a Catholic sacramental and liturgical response to Reality. 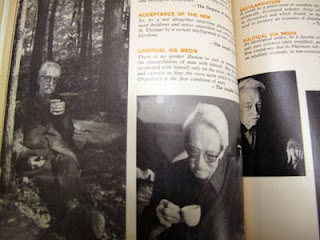