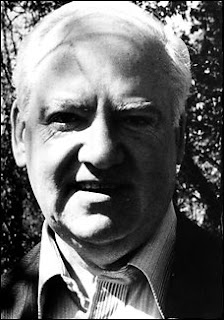 Robert Giroux, the great writer and editor, and publisher of such literary giants as Flannery O'Connor, Robert Lowell, T.S. Eliot, Virginia Woolf, Jack Kerouac and many others has died at the age of 94. The New York Times had this moving obituary on September 6.

Giroux published his friend Thomas Merton's writing in The Columbia Review, while the two were undergraduates there. He went on to work for publishing companies, including Farrar Straus & Giroux, and to publish many of Merton's books.

On October 11, 1998, the NY Times published an essay by Giroux which also served as an introduction to a new edition of "Seven Story Mountain". It provides very interesting insights into the relationship between Giroux and Merton, and what was going on behind the scenes before "Seven Story Mountain" hit the press. It is online here. The quote below is excerpted from this essay.

'Several years later, when I was working at Harcourt Brace & Company as a junior editor, I was asked to evaluate a novel by Thomas James Merton, submitted by Naomi Burton of the Curtis Brown literary agency. The hero of ''The Straits of Dover'' was a Cambridge student who transfers to Columbia and gets involved with a stupid millionaire, a showgirl, a Hindu mystic and a left-winger in Greenwich Village. I agreed with the other editors that the author had talent but the story wobbled and got nowhere. Merton was an interesting writer but apparently not a novelist.

Then, in May or June 1941, I encountered Tom in Scribner's bookstore on Fifth Avenue. I had been browsing and felt someone touch my arm. It was Merton. ''Tom!'' I said. ''It's great to see you. I hope you're still writing.'' He said, ''Well, I've just been to The New Yorker and they want me to write about Gethsemani.'' I had no idea what this meant and said so. ''Oh, it's a Trappist monastery in Kentucky, where I've been making retreats.'' This revelation stunned me. I had had no idea that Merton had undergone a religious conversion or that he was interested in monasticism. ''Well, I hope to read what you write about it,'' I said. ''It will be something different for The New Yorker.'' ''Oh, no,'' he said, ''I would never think of writing about it.'' That told me a great deal. I now understood the extraordinary change that had occurred in Merton.'