The Mark of the True Revolutionary - The Young Gandhi 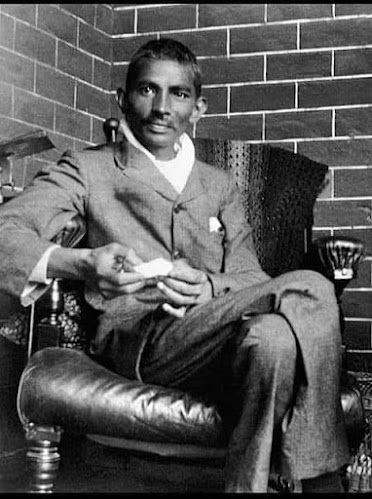 One of my Facebook friends posted this photo and story about the young Gandhi. Look at the clarity of his eyes, and his keen insight into the nature of human delusion and roots of racism. He had already found the path and courage of Nonviolence.

When Mahatma Gandhi was studying law in London, a professor named Peters had a bad attitude … but student Gandhi never lowered his head and they met very often.

One day Peters was having lunch at the university canteen, Gandhi came with his tray and sat down next to him.

The very arrogant professor said to him, “Student Gandhi, you don’t understand!” “Pig” and “bird” don’t sit down to eat together. “

Gandhi replies, “Be calm, Professor, I will fly!”

And the situation has changed. Professor Peters, filled with rage, because he understood that the student had called him “Pig”, decided to take revenge on the next exam …

But the student answers all the questions brilliantly.

Then the teacher asks him the following question: “Gandhi, if you walk down the street and find two bags, one with wisdom and the other with money, which of the two will you take?”

The smiling teacher tells him, “I would grab wisdom in your place, don’t you think?”

Gandhi replies, “Everyone takes what they don’t have, Professor.”

The already hysterical professor writes “IDIOT” on the exam sheet and returns it to the young man. Gandhi takes the sheet and sits down … after a few minutes he turns to the teacher and says, “Professor Peters, you signed the sheet, but you didn’t write my grade …”

~ If you let something hurt you … It will hurt you. But if you do not allow it, the thing will return to where it came from. ~

The following is from an essay by Lawrence S. Cunningham, a professor of Theology at the University of Notre Dame and a frequent writer about Merton. The entire essay, "Alone Among Many", is HERE.

"Nearly a half century ago, Thomas Merton wrote "Notes on a Philosophy of Solitude," an extended essay in which he pointed out that a person who enjoys solitude, by which he meant the quiet possession of the self, is the one less likely to be beguiled by mass movements, collective passions, the false siren of advertising and the lust for the ephemerally fashionable. True solitude (as opposed to individualism or "going it alone") is the cultivation of the sense of the self that permits us to adjudicate the cry of the mob and resist the lure of the moment.

Such self-possession is both a gift and a risk. It is most often a risk when acting against the consensus; such acts can earn scorn or, at worst, actual physical harm. Decades ago Ignazio Silone, the Italian political novelist, said that the first lethal blow against fascism came when the first brave person in a village chalked a large NO on the wall of the town square. Interior solitude has always been the mark of the true revolutionary. It was the inner force of Gandhi's resistance; it was the inner strength of a Solzhenitsyn whose inner life could not be broken by the horrors of the Gulag.

At a deeper spiritual level the cultivation of solitude is a necessary matrix out of which comes authentic prayer. By that is not meant that one must seek a solitary place (even though that may be a good thing to do on occasion) or go to a monastery for a retreat (also a good thing) or give up one's ordinary pattern of living. What it does mean is that if we are to pray, as opposed to saying prayers, we need the capacity to slow down, get in focus and become re-collected, albeit for a short period of time. The Bible describes that capacity as watchfulness, the alertness that brings our interior attention toward a single One. God says, through the psalmist, that we are "to be still and know that I am God" (Psalms 46:11). That stillness is the defining element of solitude."