the God of Love

"Strong hate, the hate that takes joy in hating, is strong because it does not believe itself to be unworthy and alone. It feels the support of a justifying God, of an idol of war, an avenging and destroying spirit. From such blood-drinking gods the human race was once liberated, with great toil and terrible sorrow, by the death of a God Who delivered Himself to the Cross and suffered pathological cruelty of His own creatures out of pity for them. In conquering death He opened their eyes to the reality of a love which asks no questions about worthiness, a love which overcomes hatred and destroys death. But men have now come to reject this divine revelation of pardons and they are consequently returning to the old war gods, the gods that insatiably drink blood and eat the flesh of men. It is easier to serve the hate-gods because they thrive on the worship of collective fanaticism. To serve the hate-gods, one has only to be blinded by collective passion. To serve the God of Love one must be free, one must face the terrible responsibility of the decision to love in spite of all unworthiness whether in oneself or in one's neighbor."

The Pain of Rejection

One the deepest pains
humans experience
is the pain of rejection
the pain of feeling nobody wants you.
Rejection gives rise to
tension, fear, loneliness
and a terrible anguish.
This inner pain
destroys inner peace.

One of the most effective ways
of beginning to see beauty
within the pain of rejection
is through genuine communion.
To be in communion with someone
means to be with them.

In communion we discover
we actually belong together,
and truly need each other.
Communion means
accepting another
just as they are,
with all their warts and baggage,
all their imperfections and weaknesses,
in all their pain and need.
Communion does not mean
doing something for someone.
It means being with someone;
it means showing someone
their own beauty and value.
In communion,
we give each other
the gift of
the freedom to grow.
Communion’s main enemy
is elitism,
and seeds of elitism
are within all of us.
Elitism is at the heart of
aparteid and every form of racism.

Because I know I shall not know
The one veritable transitory power
Because I cannot drink
There, where trees flower, and springs flow, for there is nothing again

Because I know that time is always time
And place is always and only place
And what is actual is actual only for one time
And only for one place
I rejoice that things are as they are and
I renounce the blessed face
And renounce the voice
Because I cannot hope to turn again
Consequently I rejoice, having to construct something
Upon which to rejoice 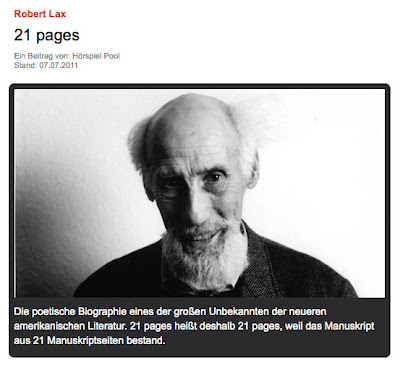 A short German introduction, then Lax reading his work.  Totally cool, the very essence of Lax.  If you don't think you have time to listen to it, start it and then minimize the window so that it plays in the background of what you are doing.  I guarantee, it will reach you at some level. 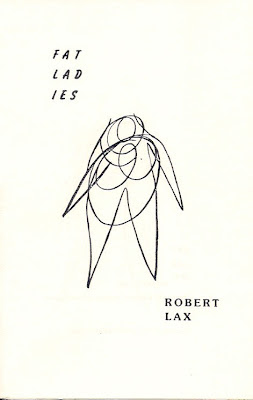 I have a little booklet of drawings by Lax - "Fat Ladies".   It is copyrighted 1984 by Furthermore Press, a limited edition of 200 copies.  It was given to me by Paul Spaeth, curator of the Lax archives at St. Bonaventure.  Here are a few drawings from that booklet.  I hope that my scanned reproductions do them justice.  There are a total of 16 drawings, many of them reminding me of angels.  Doodles, of a sort, but also meditations 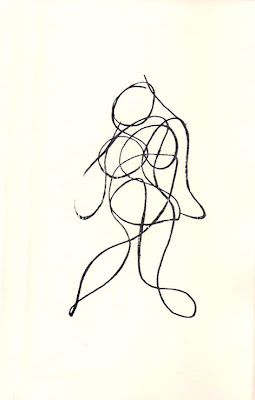 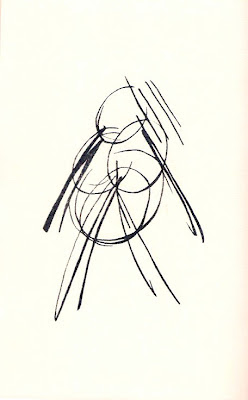 I am often amazed at the “connections” that Merton made during his life.  Merton’s friendships outside of the monastery were deep and varied - artists, writers, theologians, singers and a few of the local nobodies.  It’s as if there is wavelength of thought (or vision) that coalesces around Merton, and sometimes I wonder if we are not still being carried along by this vision (or spell).  A happening that the daily news totally misses.
As I was reading Walter Isaacson’s biography of Steve Jobs, I was fascinated with Jobs’ serious and diligent practice of Buddhism.  One of the books that inspired Jobs to become interested in the process of letting go of illusion was Cutting Through Spiritual Materialism by Chögyam Trungpa Rinpoche.
Hmmm.  Didn’t Merton meet that guy in India?
Even before he even left for Asia, Merton was reading Chögyam Trungpa’s Born in Tibet.  Chögyam Trungpa must have been 29 years old in 1968.  And then, “quite by chance”, Merton meets Chögyam Trungpa Rinpoche in Calcutta.  This is what he writes in his journal on October 20, 1968:

“Yesterday, quite by chance, I met Chogyam Trungpa Rinpoche and his secretary, a nice young Englishman whose Tibetan name is Kunga.  Today I had lunch with them and talked about going to Bhutan.  But the important thing is that we are people who have been waiting to meet for a long time.  Chogyam Trungpa is a completely marvelous person.  Young, natural, without front or artifice, deep, awake, wise.  I am sure we will be seeing a lot more of each other, whether around northern India and Sikkim or in Scotland, where I am now determined to go to see his Tibetan monastery if I can.  Hi is a promising poet.  His stuff in Tibetan is probably excellent; in English it is a little flat, but full of substance. He is also a genuine spiritual master.  His place in Scotland seems to have become an instant success and I think he has something very good underway.  I am certainly interested in it.  The newsletter he puts out is good.  His own meditations and talks, from what I have seen, are extraordinary.  He has the same problems we have with “progressive” monks whose idea of modernization is to go noncontemplative, to be “productive” and academic.  …"