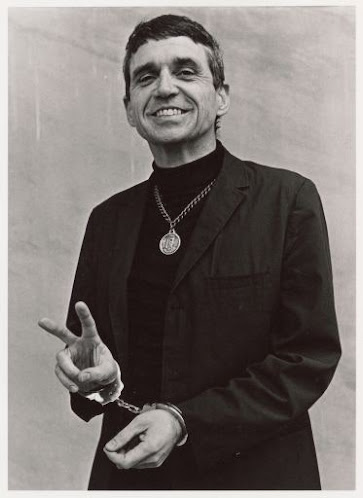 One’s humanity is not primarily an inheritance or a gift from on high. Living humanly has a price attached. Let us pay up, and gladly. Knowing as well that the opposite, living inhumanly, pays huge dividends in a crooked world.

Celebrate then, the burden.

In the last couple of days I've come across some things that have given me a slightly different feel for Merton. A little more insight into who Merton was, how he was, as a person living in the world. When I dream of Merton, he always has aspects of a very friendly and somewhat rambunctious dog. And though Merton is not easy to pin down, I think I'm on the right track ...

The first article is in Tricycle, a Buddhist magazine. "The Jesus Lama: Thomas Merton in the Himalayas".  It is an interview with Harold Thomas. Thomas, at the time, was a skinny 27 year old, a Catholic convert, and in India studying Buddhism with the Dalai Lama.

Talbot had met Merton at Gethsemane in 1958, 10 years before and just after his conversion, when Merton told him: "And I have only one thing to say to you: the Church is a very big place. Always remember to go your own way in it.”  Talbot remembered that and recounted it to Merton upon meeting him again in Asia. To which Merton replied: “Did I say that? That’s pretty good. And look at where we both are.” 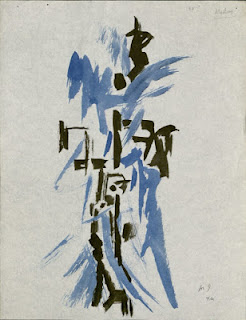 “What is really meant … is continual openness to God, attentiveness, listening, disposability, etc. In the terms of Zen, it is not awareness of but simple awareness.” (Day of a Stranger, p.41, written in 1965)

In some notes that Merton prepared for an exhibition of his calligraphic drawings, he writes:

“Neither rustic nor urbane, Eastern nor Western, perhaps can be called expressions of Zen Catholicism”. (from a notebook in the TMC collection)

Talbot is able, in this interview, to explain to me how Merton understood Zen within the context of his Christian tradition and how he "got" the consciousness of dzogchen -- what exactly happened to him at Pollonaruwa. If you're interested in this sort of thing, read the full interview. This is the very best interpretation of Merton's Pollonaruwa experience -- which I never quite understood -- that I have ever read.

At first Merton had no interest in meeting with the Dalai Lama whom he presumed to be the big banana of an organized religion. Talbot persisted. This is how the meeting is recounted in the interview:

Talbott: The Dalai Lama’s robe and Thomas Merton’s white Cistercian habit with the black scapular looked Giottoesque. It was an image of two figures encountering each other who deserved to wear those robes, who were part and parcel of the world represented by those very robes. So that one really had a surfeit of visual inspiration. Both men were very solid. Unornamental, compact, strong, hard beings. Now the Dalai Lama has an external joviality and graciousness which is appropriate to a sovereign. To put you at your ease, to make it possible for beings to be in relation to him, he plays down the radiance, the dignity, the charisma, the persona that the West has developed a romantic myth about, but who in himself has his own distinct presence and radiance. There is no presumption about him. He’s a person who draws a heart-breaking reverence from the people who are devoted to him, and to see him in this room with a man to whom we don’t need to apply adjectives, but if we were, it would be things like mensch, authentic…

Talbott: Yes. Mensch—manly, authentic. No gestures. No artifice. No manner. No program, no come-on—just, “Here I am folks”—and folks happened to be the Dalai Lama. And they encountered each other and, appropriately enough, there was utter silence. And then the Dalai Lama challenged him or greeted him by saying, “What do you want?” and he said, “I want to study dzogchen.” I was about to clobber Merton. I couldn’t take it. But I was very glad to be aboard. It was the generosity of Merton that made it possible for me to attend those meetings. He said, “You’re here studying with the Dalai Lama. I want you present.” Whereas it might have been delightful to be alone with just the Dalai Lama and the interpreter. It’s my good karma that I was there. There was so much good humor and so much laughter and so much camaraderie and so much confidence of understanding and so much no need for explanation and build-up and equipping themselves on their parts, you see. They had done their homework.

Tricycle: What did the Dalai Lama ask Merton about Christianity?

Talbott: If I’m not mistaken, it was about how you live the contemplative life in the West and what you do to make it possible in this modern world to live the life of a monk in the West. How do you stave off spiritual annihilation? These conversations were very much Merton equipping himself with the transmission of Buddhism from the Dalai Lama and very much the Dalai Lama equipping himself with the low-down from a reliable guide. This was not a papal legate. This was not someone setting up a conference for the Pope. This was not a front man. This was an embodiment of something which another embodiment—a tulku—who needs to function in the world, was drawing upon as a resource.

Tricycle: Did Merton have a daily meditation practice?

Talbott: I have no idea, but I asked him once, like a very fresh kid, “What is your meditation practice? And what do you think of this stuff?” He said, “My meditation practice is largely walking in the woods in a state of meditative absorption.”

Tricycle: It sounds like the Dalai Lama was providing a transmission to be carried forth to all of Christendom.

Talbott: The Dalai Lama is saying to him, “I want with my own eyes and ears and speech to assure myself that you have the faith firmly grounded” and—let’s be daring—let’s think that there are certain beings who do not have to come every day and attend Zen or vipassana retreat. This could be a romantic projection but I have to say what I think: Merton had thirty years behind him and when he walked into a room or the cell of a meditator, monk or lama, he was greeted with a recognition. I’ve never seen a Western person received by a lama the way that he was received.

Tricycle: Did the Dalai Lama feel personally responsible that Merton get it right?

Talbott: That’s how I see it. Dzogchen is the primordial state of mind, it’s the enlightened mind, that has never been anything but enlightened. We are living in a world, it is said, which is a product of our own unenlightened experience, our ma rigpa, our ignorance of the true nature of reality, absolute and relative.Dzogchen is the practice of the primordial enlightenment but it is also a view or standpoint towards reality. Its meditation is to sustain and deepen this. That’s a contradiction because dzogchen is the presence of fulfillment, not a process. We already are in primordial—or original—enlightenment in dzogchen. That’s the starting place.

It's all just extraordinary.

He [Merton] had reached a point—unrecognizable to me and perhaps to you—where the Judeo-Christian theistic tradition of the Mother Church of Christendom and dzogchen of Nyingmapa Tibetan Buddhism were not in contradiction. Furthermore he had grown up in a Catholic village in France that had so deeply affected him that it had planted a seed which had caused him to enter the Church. He was a man who had spent thirty years in a Cistercian abbey. His training came from the Church. He was a generous man and he was a just man and he acknowledged what he owed to the Church. It was his formation. It was not his cocoon. It was not his prison. It was himself and it was a very good self and he needed to uphold it.

Because Merton stood for the contemplative life the way—to make a vulgar and irrelevant analogy—Picasso stands for art. For contemplatives there are illuminated beings, there are hidden yogis, but as far as how ordinary people come into touch with the great spiritual heritage of the West—including the apophatic tradition, the Via Negativa—it’s through the mystical teachings from St. Paul and St. John, St. John’s gospel, Dionysius the Areopagite, the great medieval mystics Thomas Aquinas and St. John of the Cross, and St. Teresa of Avila—and that’s just about it, folks—that’s it for the big league contributions to spirituality at the contemplative level in the West. And every now and then you get somebody who says “Wait a minute, I know the chips are down and the circumstances are against us, but let’s get in there once more and try to stay alive spiritually.” And that’s Merton for twentieth-century Westerners. Despite all of his manliness, Merton was a man of the old moment before the Second World War, a man of enormous personal and cultural refinement. He belonged in a French salon as well as in a forest in Kentucky. There is no question about it. He had the qualities we’re losing. Gaining, gaining other wonderful ones but losing, losing something. Merton had this consummate worldly culture as well as this jewel of spirituality. He was a gift to humanity, with the naivete and the nerve to take the writings of mystics seriously.

Merton saw himself as a man who had to purify himself of something that was a very heavy load to carry. But by the time he came to India, whether or not finding dzogchen was central—that’s my organization of significance in his life—it turns out that he had lived his life and this was the Mozart finale and he was in a state of utmost exuberance, engaged, and absorbing, and eating with delectation every moment of every experience and every person that passed. He tipped Sikh taxi drivers like a Proustian millionaire. He was on a roll, on a toot, on a holiday from school. He was a grand seigneur, a great lord of the spiritual life. He radiated a sense of “This is an adventure, here I am folks,” and he woke people up and illuminated them and enchanted them and gave them a tremendous happiness and a good laugh. But also there was always a communication from him that he was a representative of the religious life whether he was wearing a windbreaker or a habit. The Indian people greeted him as a pilgrim, a seeker, and that was the basis on which he was met by everybody and congratulated valiantly whether they recognized his public identity or not. People knew his spiritual quality. People in planes knew it. There was no question about it. Merton was not an object of scrutiny, he was an event.

How glad I am that I discovered Merton's writings early in my life and that he has been my guide all the way through. This is a terrific interview, Harold Talbot. Thank you for your invaluable insights.