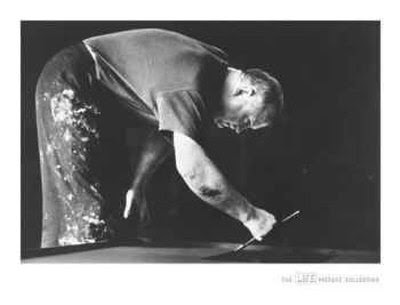 "Art is art. Everything else is everything else." - Ad Reinhardt
In other words, art does not represent something else.  Art stands on its own, a living entity, in and of itself. 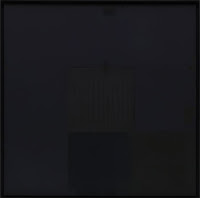 Reinhardt was a pioneer of conceptual and minimal art.  He was a critic of abstract expressionism.   Reinhardt’s earliest exhibited paintings avoided representation, and show a steady progression away from objects and external reference.  He is best known for his Black paintings of the 1960s.
Ad Reinhardt, Merton and Lax were friends.  They met while they were students at Columbia University in New York City.  (Actually, Reinhart and Lax attended the same high school, but that's another story) Ad was studying art history at Columbia and frequently contributed cartoons to the school newspaper, Jester, where Merton and Lax were staffers.
The three were bonded by a common vision.  A similar calling that centered around simplicity and emptiness.  Though they each went their own way in the world, they never lost sight of each other.

"... I think Ad Reinhardt is possibly the best artist in America ... Reinhardt's abstract art is pure and religious.  It flies away from all naturalism, from all representation ... " - Merton, 1940, "Run to the Mountain, page 128

Merton, Lax, and Reinhardt form a potent troika, forging into new territory.  Continuing the "Beat" style of their youth, they are unusual, contrary to what is considered traditional or accepted, off the beaten track, outside the norm.  Reinhardt's paintings remain controversial decades after they were composed.  Lax's poetry is shocking in its simplicity and is still relatively unknown in America.  Merton's writings are popular, but he was rejected for inclusion in the Catholic Catechism.

In the spring of 1959 Lax and Reinhardt visited Merton at Gethsemane.  In his thank you note, Reinhardt says to Merton:

"... let's argue about art and religion some more.  If you're doing a book on it, and you have a world-wide audience, can I help you say what's right, instead of saying things people want to hear and agree with?  You just make people happy if you don't say what's right, true (beautiful?) ... thanks for the weekend."

In fact, in 1962 Merton was taken with the art of William Congdon, an American painter, abstract expressionist and devout Catholic who focused on religious themes.  Merton wrote a few paragraphs praising Congdon's work, and threw in a line condemning abstraction:

"... here the dynamism of abstraction has been set free from its compulsive, Donysian and potentially orgiastic self-frustraion and raised to the level of spirituality." - Thomas Merton, jacket copy for William Congdon, In My Disc of Gold: Itinerary to Christ of William Congdon, 1962

Well, Reinhardt soon caught wind of this and fired off to Merton a blistering letter, taking him to task for his poor judgement.

Merton had the good sense to listen to Reinhardt's criticism.  His reply, though superficially humerous, shows that Merton and Reinhardt were looking at each other, eye to eye, and this was a time of reckoning.


"Dear Ad,
"Once, twice, often, repeatedly, I have reached out for your letter and for the typewriter.  Choked with sobs, or rather more often carried away by the futilities of life, I have desisted ...

"Truly immersed in the five skandhas and plunged in avidya, I have taken the shell for the nut and the nut for the nugget and the nugget for the essence and the essence for the such-ness ... I have embraced a bucket of schmaltz.  I have accepted the mish mash of kitsch.  I have been made public with a mitre of marshmallows upon my dumkopf.  This is the price of folly and the wages of middle-aged perversity.  I thought my friends would never know ... I am up to my neck.  I am in the wash.  I am under the mangle.  I am publicly identified with all the idols.  I am the byword of critics and galleries.  I am eaten alive by the art racket.  I am threatened with publication of a great book of horrors which I have despised and do recant." - Merton letter to Ad Reinhardt, 1962

Merton decisively moved to Reinhardt's camp and the world of contemporary art.  As an artist, he would not go back to his drawings of Our Lady.   As an author, he would not turn medieval concepts to a task for which they were not suited.

Like Lax and Reinhardt, Merton headed into the Unknown. 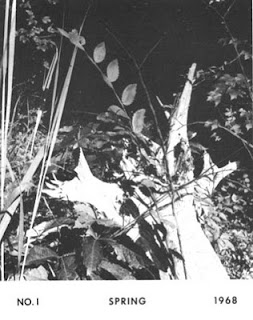 [photo by Merton, cover of Monk's Pond 1st edition, spring 1968]
As a memorial to Reinhardt, Merton published in the first issue of his literary magazine, Monk's Pond, a chantlike text by Reinhardt, dating to 1962.  Here is one verse of that text:


"The one object of fifty years of abstract art is to present art-as-art and as nothing else, to make it into the one thing it is only, separating and defining it more and more, making it purer and emptier, more absolute and more exclusive - non-objective, non-representational, non-figurative, non-imagist, non-expressionist, non-subjective.  the only and one way to say what abstract art or art-as-art is, is to say what it is not." - Ad Reinhardt, Monk's Pond 1, Spring 1968, p. 6 first published in Art International, December 1962 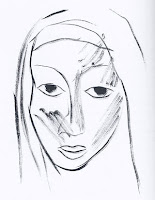 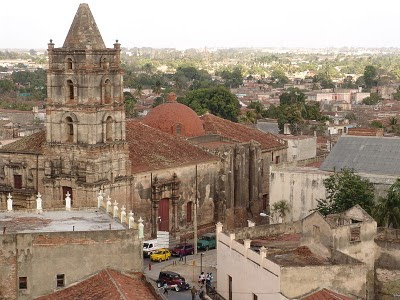 My Eye Your Eye

Merton said that Lax had a direct link to the living God.

On the DVD, middle of the moment, there is a bonus film, My Eye Your Eye.  Filmed in Patmos in May 1999, this is Robert Lax’s last year in Greece, roughly his last year of life.  For 21 minutes you see only Lax’s head and his right hand, which holds a wooden staff of sorts (a walking stick or ... a broomstick?!).  He wears a navy blue knit hat. The only movement is in his eyes, and ever so slight movements of his head.  Lax does not look at the camera, his eyes are mostly downcast, but he is awake and aware, watching and waiting, and you are drawn into his profound stillness.

All of those who were able to meet Lax during his lifetime consider it a particular stroke of fortune.  They say that from that point on he became part of their bodies and souls, as though they had met a true saint.

My Eye Your Eye is like being in the presence of holiness.  For 20 minutes.  Watching and waiting.  I've always wanted to know better what Bob Lax was like - how he was.  This film does it.

There is a poem of the same name by Lax:

My eye. Your eye. Or even if it’s mine and mine.
Why should my eye look at your eye?
Why should yours look into mine?
Am I seeking out a glance, a look in darkness?

middle of the moment

If you appreciated the film, "Into Great Silence", you will like "middle of the moment", a cinepoem about nomadic life by Nicolas Humbert and Werner Penzel.    The film not only chronicles people as they move from place to place, it becomes a nomadic experience itself - not afraid to stay in one place, but knowing when it's time to move on.

"The essence of any experience, any moment, is to be found where people are in most intense contact with the place they occupy. And, paradoxically, it is through a nomadic existence that one occupies a space the most intensely. Whether the nature of this nomadism is largely physical, as for the wandering tribes that travel the South Sahara and Cirque O or rather abstract, as for American philosopher and poet Robert Lax, is not so important. What the people portrayed in this documentary share is that their nomadic disposition, which strips life down to its bare essentials, makes them into completely centred human beings. They are not stuck in life’s cycles but co-exist with them, partaking in them with a freedom that is unknown to most of us." 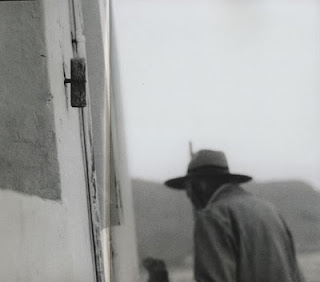 photo by Nicolas Humbert
"...in mountains where sheep are
indistinguishable from snow
the snow from the cloud, the
clouds from the sky..."

"no hope of comprehending the whole, no hope
of understanding any one object either, without
some comprehension of the whole.

no hope of solution of these problems;
no possibility of abandoning them either (as
long as one lives)

better to be engaged in them to be engaged by
them, in spirit of play (serious spirit, serious
play) while time passes over one, under one, through
one."

Robert Lax, from something called the "C Journal"