An Ode to the Spirit 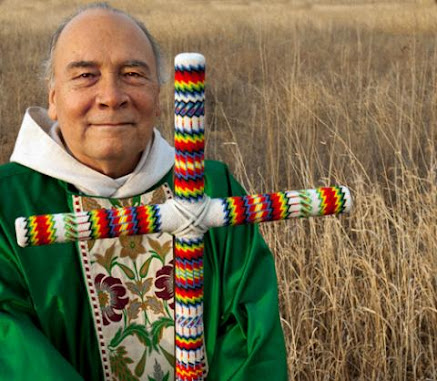 An Ode to the Spirit

In the peaceful places of my life, wherever I may find them, I will search for you. In the midst of the crowd, I will look for you. In the sound of laughter and weeping, I will listen for you. You are around me, within me, beside me, no matter where I am. You are everywhere at once and always. When I go up to the highest point of joy I know, you are waiting for me. When I fall to my lowest point, you catch me. When I am alone in the deep night, you hold me. You are forever, in all places, in every moment. You let me go at the right time. You release me to the open air. You trust me. And I, in all that I do, and say, and believe, trust you. I have since the beginning. I will until the end. You are my creator, my simple truth, what I believe and why I believe, the sum total of my life’s experience. I have made my choice and pledged my love. I am in this with you, in every way I can be, for as long as I can be, until your mystery surrounds me and the next dream begins.~ Steven Charleston is a Native American elder, author, and retired Episcopal bishop of Alaska. Adjunct Professor of Native American Ministries, Saint Paul School of Theology at OCU, Citizen of Choctaw Nation.
at February 19, 2021 1 comment:

the radiation of a silence that is filled with love 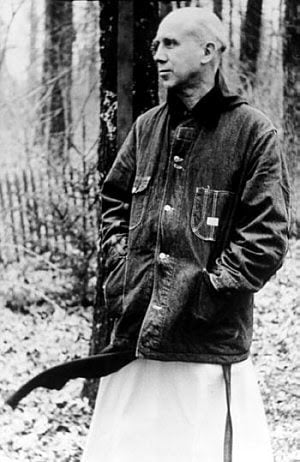 From Jonathan Montaldo:
An excerpt from "Uncaging His Own Voice: Thomas Merton's Inner Journey Toward 'Parrhesia' [Free Speech]
Merton’s essay, “Day of A Stranger” for Ludovico Silva’s magazine "Papeles" is among his best. His essay relates a “day” in Merton’s life at his hermitage. Merton writes in the unexpurgated voice of the self he was excavating to be most true. He speaks of who he has become through his unique monastic journey in three simple, declarative sentences:
What I wear is pants.
What I do is live.
How I pray is breathe.
Merton’s speech, for this one day at least, is terse and impoverished. He distills his voice down into its ordinary communion with all simple beings inhabiting the world:
“What I wear is pants.” (He puts off his monastic robes and the cowl that implicates his distinction and “specialness” from others. He knows himself only as he is, another ordinary man in blue jeans accomplishing ordinary tasks. He sweeps his porch; he tends his fire.)
“What I do is live.” (His vocation is a call to be simple. He needs no other place to go than where he is now. He has no one else to meet. He quiets his pronouncements. He surrenders, to this one day at least, all his grandiose plans. He considers the next task in front of his nose, even just chopping wood, as God’s will for him right now.)
“How I pray is breathe.” (Being grateful to be alive is prayer. Being awake and watching as day breaks, and staying up all night as the stars dance, is his contemplation. He forgets whatever he has written on prayer and prays. He listens to whatever voices in the trees or in the gardens of his mind call out for his attention. Silence harmonizes him; it renders him receptive to the ‘hidden wholeness’ of each thing with every other thing to which his heart connects. Alone in the woods, he listens to the speech rain makes. He plays his small part in the simple ecologies of another day. He realizes, for this one day at least, the way the wind is blowing. And thus he receives the fruits of a sermon by the birds living near his hermitage: they are inviting him to share their liberty, to know the ordinary freedom of those who do not know they have names.)
In a journal entry for July 25, 1963, Merton transcribed in English two notes from the French in an article by M. Moré in the magazine "Dieu Vivant" (12). Merton could have written these words. The two insights he culled from this article are a gloss on the three simple declarations of his "true voice:" “What I wear is pants. What I do is live. How I pray is breathe”. Merton had underlined Moré:
"We don’t ever stop being plagued by words: they devour us… We spend most of our lives editing pamphlets, manifestoes, reports, writing articles, essays, novels. We rush in crowds to conferences whose numbers grow each day in inverse proportion to the interest they hold."
Then, from further down in the article, Merton copied an even more significant insight:
"The witness required of each of us is much more that of a transparency rather than a witness of words—a word, even an exact one, can raise a lot of contradictions, but nothing can resist the radiation of a silence that is filled with love.”

The “radiation of a silence that is filled with love” encapsulates Merton’s hopes for himself as a monk and writer that his life could eventually become a more silent witness to Life's simple, underground inclusiveness, to the “hidden ground of love” that binds us all. (Jonathan Montaldo)

Link to Merton's essay, "Day of a Stranger" is HERE.

Link to Jonathan Montaldo's "Uncaging His Own Voice" is HERE.

the heresy of individualism 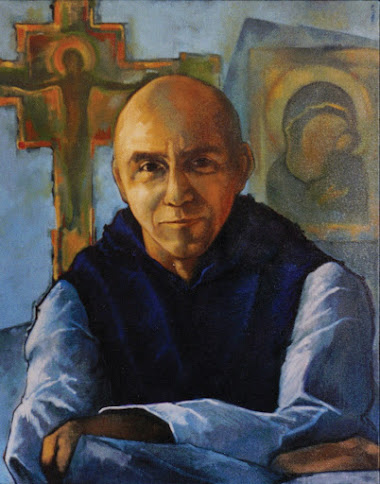 painting of Merton by Jim Cantrell
The heresy of individualism; thinking oneself a completely self-sufficient unit and asserting this imaginary “unity” against all others. The affirmation of the self as simply “not the other.” But when you seek to affirm your unity by denying that you have anything to do with anyone else, by negating everyone else in the universe until you come down to you: what is there left to affirm? Even if there were something to affirm, you would have no breath left with which to affirm it.
The true way is just the opposite: the more I am able to affirm others, to say “yes” to them in myself, by discovering them in myself and myself in them, the more real I am. I am fully real if my own heart says yes to everyone.
--Thomas Merton
Conjectures of a Guilty Bystander, p 143
at February 01, 2021 No comments: