"Our idea with PAX was to take pieces and put them in order; a "harmony of order" as St. Thomas said.  Getting things in order is a good thing.  As far as art goes,  I think that beauty is the tranquility of order.  With PAX, what we thought that we should do is have artists working for peace, not by making peace posters, but by making the best art they could, and by letting us publish it, and by letting the world see what harmony and beauty there can be in the world when people are working on art instead of on war.  I think that was the essential idea about PAX.  And, in general, people did contribute, and they contributed with very good heart.  I think there were eighteen issues of it.   We planned it all in Paris.  But we weren't really able to publish it until JUBILEE began, and then Ed Rice let me do it.  Berhard Moosbrugger was in on the plan from the beginning, and he liked it too."

the river and the sea (Lax poem)

doeseveryriverruntothesea
&
is
the
sea
a
home
for
me
? 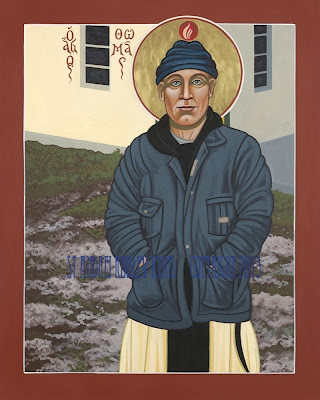 In an informal talk in Calcutta, just weeks before his death, Thomas Merton described the monk, and thus himself, as a “very strange kind of person,” a “marginal person, who withdraws deliberately to the margin of society with a view to deepening fundamental human experience.” The monk in the modern world, he continues, “is no longer an established person with an established place in society. 'The monk' is essentially outside of all establishments.”

Weeks later, in a conference just hours before his death, Merton recalls a Buddhist monk during the Chinese invasion of Tibet who spoke these words to another monk in great distress, “From now on, Brother, everybody stands on his own feet.” Merton repeats the line, describing it as “an extremely important monastic statement.” From now on, everybody stands on his own feet. Merton gestures further: “You cannot rely on structures. The time for relying on structures has disappeared.”

It seems to me that Fr. Bill’s icon beautifully reflects Merton’s witness as a marginal person, standing at the margins, standing on his own feet. Yet Merton’s gaze, perfectly at home outside his hermitage, is not that of a rugged loner, indifferent to his visitor. His gaze welcomes and invites me in.

It is She, Sophia, who welcomes and invites me in: Wisdom-child in flame dancing playfully over Merton’s head. She and Merton are one, and we are three, encircling in time and space like Rublev’s Trinity. I am at peace. We are friends. The time for relying on structures has disappeared.

The monk is a marginal person, and I confess, I want so much to follow. Cor ad cor loquitor; heart speaks to heart. From before all beginnings, Her heart speaks silently to my heart, calling me forth with gentleness into being, into a brand new day.

The monk is a liminal man, in wool cap and denim jacket, guarding the doorway between life and death. Why do you seek the living among the dead? There is music on both sides, but stay awake, and let Life be your song! It is life and love that makes you dance. How the valley awakes! The cool hand of the nurse, whispering “Mercy within mercy within mercy.” The bridegroom is coming.

The frost at Merton’s feet, spread thinly over Kentucky bluegrass, is familiar to me. I am a native of Kentucky, where gray-damp winters drove us children indoors by late afternoon, and necessitated conversation and family play after dinner, deep into the evening, around smoking wood fires that my father loved to build. A Child’s heart, sometimes frozen, still beats within me. I want the frost to melt away.

In Fr. Bill’s icon Merton comes to us as heir to Julian of Norwich, heralding the eschatological secret of Christian hope. Gazing on me, gazing on him, he reminds me, “Do not be afraid.” What was fragile has become powerful. I loved what was most frail. All things are pregnant with expectation.

“Wisdom,” cries the dawn deacon, and I am learning, even as I fall back into sleep, how to listen. A child again in Her mercy I am learning to stand on my own two feet.

Thank you, Fr. Bill, for showing us, so humbly and lovingly, how to listen, and for bringing into birth this remarkable icon of Thomas Merton.

***
Christopher Pramuk is the author of four books, including Hope Sings, So Beautiful: Graced Encounters Across the Color Line (Liturgical, 2013) and Sophia: The Hidden Christ of Thomas Merton (Liturgical, 2009), which was awarded the International Thomas Merton Society’s 2011 “Thomas Merton Award,” a.k.a. “The Louie,” its highest honor. A lifelong musician and student of African American history and spirituality, Pramuk’s present work focuses on racial justice and interracial solidarity in society and church.

From the American poet, Robert Lax: 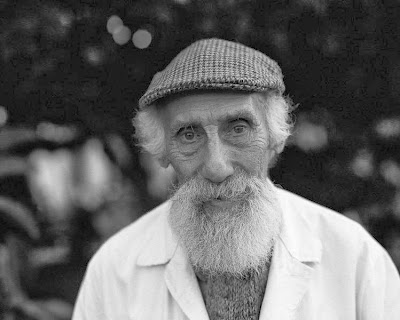 Unconditional love. That’s the bottom line. Everything is here because of love. That’s why we were created — to love. Love keeps things going, not just for now, but forever. Love gives life and makes sure what’s around today will be around tomorrow. It’s all about compassion. That’s what the cosmos best responds to.

Every moment is a gift. Relax, get into the moment, and do all you can to listen to it. I mean, really, really listen. Be present to the moment with everything you are.
It takes practice. After you’ve listened for a while, you start responding. I think you start working your gifts in response to what you’ve heard. You become appreciative of the moment. You give back because you begin to see how everything is on loan, a gift from God.

Learn how to look. Take time to look to see what’s right there in front of you, to let what you see sink in. When you look at a flower opening or a tree moving with the wind, you just relax and take it all in. Try and see everything like that, if you can.

Looking and listening lead into everything….. You become more totally aware of reality. It’s so true — everything we need to live well is already within our possession. Wisdom is right before our very eyes.

Be gentle and patient both with yourself and with others, no matter what comes along. In this way, waiting becomes a fulfilling, very meaningful experience. If you live gently, honorably, focusing on the cultivation of your heart, good things are sure to follow.

Prayer is a way of doing instantaneous good for all things in all places. It’s a way of sending out love everywhere at one. It’s a power that everyone has access to, and it can transfigure the world. Prayer makes everything you do more real, lasting, meaningful and fruitful. Through prayer, everything just flowers and flows.

Try to live as purely and as simply and as gently as you can. Relax. Be flexible. Be forgiving. Be creative. Be loving. You are a peacemaker. Those who cross your path may need you.

Listen, be discerning, use all the radar you can generate in your waking moments. Try to keep the balance. The whole world’s watching, counting on you to do the right thing, the loving thing. So let in the light whenever, wherever you can.


From http://ncronline.org/blogs/road-peace/wisdom-robert-lax-cultivate-exercise-compassion and based on “The Way of the Dreamcatcher: Spirit Lessons with Robert Lax, Poet, Peacemaker and Sage” by Steve Georgiou.
at November 01, 2013 3 comments: