In winter the stripped landscape of Nelson county looks terribly poor. The houses of our neighbors between here and Bardstown are pretty miserable. We [Trappists] are the ones who are supposed to be poor. Well, I am thinking of the people in a shanty next to the Brandeis plant, on Brook Street, Louisville. We had to wait there while Reverend Father was getting some tractor parts. The woman who lives in this place was standing out in front of it, shivering in some kind of rag, while a suspicious looking, anonymous truck unloaded some bootleg coal in her yard. I wondered if she had been warm yet this winter. ...The world is terrible, people are falling to pieces and starving to death and freezing and going to hell with despair, and here I sit with a silver spoon in my mouth and write books and everybody sends me fan mail telling me how wonderful I am for giving up so much. And what, I'd like to ask them, have I given up anyway except headaches and responsibilities?

Email ThisBlogThis!Share to TwitterShare to FacebookShare to Pinterest
Labels: poverty 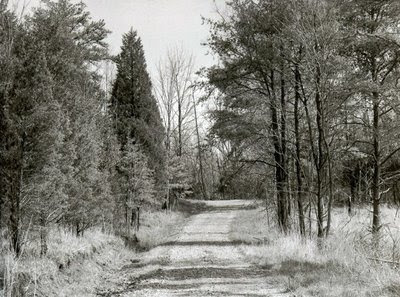 "Man’s free the moment of his contact with God …
The law of freedom is an appropriate theme for today. When those worshippers knelt in homage on the floor of the humble stable with everything else put behind them – their homes, the wilderness, the guiding star, the agony of the city – when all these had lost their value and their impressiveness and the worshippers’ whole being was concentrated in the single act of adoration, the symbolic gesture of laying gifts before the manger signified the achievement of liberty. They were free. " - Fr. Alfred Delp SJ

The “journey” is one of the great spiritual archetypes found in every major religion and culture. Even though Western monks are characterized by geographic stability, monastic life is still viewed as a journey, although essentially an interior one.

St. Benedict, the founder of most Western monastic orders, was skeptical of those who adopted a wandering lifestyle. He made a point to distinguish between authentic spiritual pilgrimage, and what he called “gyrovagism”.

“While the gyrovague is rootless, and therefore cannot really grow, the authentic pilgrim is someone solidly rooted. Either he has a “home” from which he comes and to which he will return at the end of his pilgrimage; or – if he has adopted the existence of a permanent pilgrim – he has found enough inner rootedness to go beyond the supportive environment of a geographical and cultural rootedness.

"The pilgrim is at home everywhere without trying to build a home anywhere. He has a sense of freedom that can easily become a threat to anyone who still finds his security in the fact of belonging to a specific place and group or to a solid system. He is not a good client for the merchants of foreign spiritual goods. The gyrovague, on the contrary, builds temporary homes everywhere he goes, buys all the last products on the market and becomes the naïve disciple of the last self-made master. "

Armand Veilleux, o.c.s.o., from an article that appeared in a special issue of Monastic Studies [n 16, Christmas 1985] “In Honour of Dom Jean Leclercq”

Email ThisBlogThis!Share to TwitterShare to FacebookShare to Pinterest
Labels: Advent and Christmas

meme on hermits, mystics and eccentrics

[Note: This blog has been "tagged for a meme" to describe my first experience with a mystic, hermit or eccentric. I want to keep this blog exclusively centered around Thomas Merton and the contemplative life, so I have posted my response to the meme on my more eclectic blog, "Quotes and Musings".]
at January 05, 2009 1 comment: 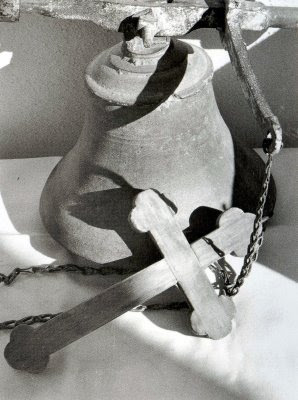 Bell from the old Abbey Gatehouse,
photo by Harry L. Hinkle
This seems a very Merton way to ring in a new year:

"They break in upon our cares in order to remind us that all things pass away and that our preoccupations are not important.
"They speak to us of our freedom, which responsibilities and transient cares make us forget.
"They are the voice of our alliance with the God of heaven.
"They tell us that we are His true temple. They call us to peace with Him within ourselves."
- Thomas Merton, Thoughts in Solitude, 67