the reality and unreality of our being

"... it is in solitude that the monk most completely comes to discover the true inner dimensions of his own being, at once "real" and "unreal".  The conviction of ones' "self" as a static, absolute and invariable reality undergoes a profound transformation and dissolves in the burning light of an altogether new and unsuspected awareness.  In this awareness we see that our "reality" is not a firmly established ego-self already attained that merely has to be perfected, but rather that we are a "nothing", a "possibility" in which the gift of creative freedom can realize itself by its response to the free gift of love and grace.  This response means accepting our loneliness and our "potentiality" as a gift and a commission, as a trust to be used - as a "talent," in the language of the parables.  Our existence is then at once terrible and precious because radically it belongs not to us but to God.  Yet it will not be fully "His" unless we freely make it "ours" and then offer it to Him in praise.  This is what Christian tradition means by "obedience to the Word of God."  The monk must learn this for himself."

our proper business: curiosity and awareness

What I’m proposing, to myself and other people, is what I often call the tourist attitude – 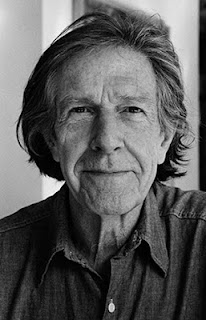 that you act as though you’ve never been there before. So that you’re not supposed to know anything about it. If you really get down to brass tacks, we have never been anywhere before.

Value judgments are destructive to our proper business, which is curiosity and awareness.

As far as consistency of thought goes, I prefer inconsistency.

Art’s purpose is to sober and quiet the mind so that it is in accord with what happens.

What right do I have to be in the woods, if the woods are not in me.

One shouldn’t go to the woods looking for something, but rather to see what is there.

Out of the work comes the work. 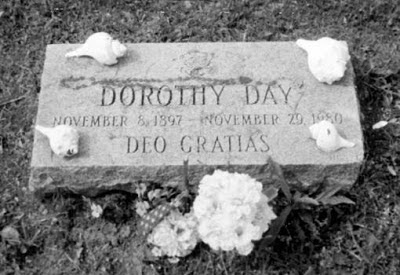 "The greatest challenge of the day is: how to bring about a revolution of the heart, a revolution which has to start with each one of us? When we begin to take the lowest place, to wash the feet of others, to love our brothers with that burning love, that passion, which led to the Cross, then we truly say, 'Now I have begun'" 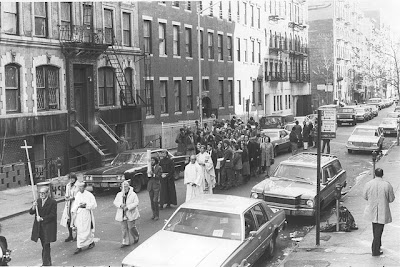 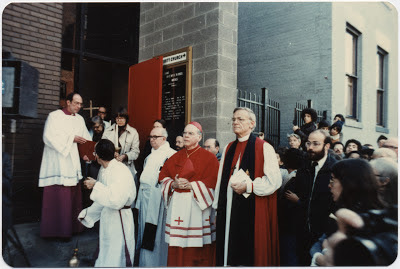 Photo of Cardinal Terence Cooke outside the Nativity Catholic Church before Dorothy's funeral Mass.  Paul Moore, the Episcopal Bishop of New York, is beside him.

From Robert Ellsburg: "I don't know whether Cardinal Cooke wanted to hold the funeral at St. Patrick's. I know he offered to celebrate the funeral mass [at Nativity Church on 2nd Avenue, close to the Catholic Worker] but wanted to change the time because of a prior commitment. This would have interfered with the schedule for the soup line and Tamar [Dorothy's daughter] among others didn't want to do that. Cooke did graciously offer to come down and bless her casket at the entrance to the church. … I don't know whether Cooke greeted everyone who arrived. I thought he left after the blessing of the casket. Some people have said they believe he stuck his head in the side door of the church during the service. I didn't see this, but it is possible. He later celebrated a memorial mass for Dorothy at the cathedral." 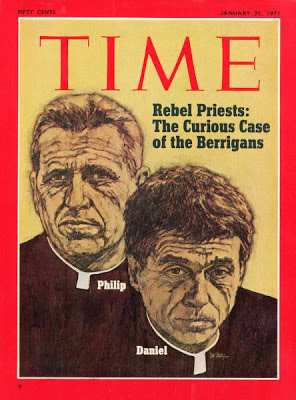 Can you imagine if they had managed to kidnap Kissinger??!! (I'm very glad to have that Time magazine cover added to the eclectic lore of louie. )
at November 28, 2012 2 comments: 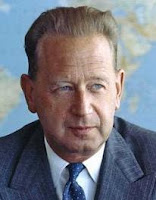 "To have humility is to experience reality, not in relation to ourselves, but in its sacred independence.  It is to see, judge, and act from the point of rest in ourselves.  Then, how much disappears, and all that remains falls into place.

"In the point of rest at the center of our being, we encounter a world where all things are at rest in the same way.  Then a tree becomes a mystery, a cloud a revelation, each man a cosmos of whose riches we can only catch glimpses.  The life of simplicity is simple, but it opens to us a book in which we never get beyond the first syllable."