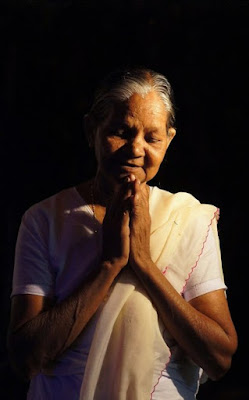 Discernment is being grasped in the Spirit's arms and led in the rhythms of an unknown dance.

"Spiritual discernment asks us to pay attention. We need to attend to both what goes on around us and within us. Ideally, this attentiveness goes on much of the time, a sort of low level, constant spiritual sifting of the data of our experience. But there are times when discernment becomes much more focused, when a crossroad is reached or a choice called for. At times like these the cumulative wisdom of tradition tells us to pay attention on many levels: to consult Scripture, to seek the advice of trusted advisors, to head the sensum fidelium (the collective sense of the faithful), to read widely and deeply the best ancient and contemporary thinking; to pray, to attend to the prick of conscience and to the yearnings and dreamings of our hearts, to watch, to wait, to listen.

"Discernment is about discriminating: sifting through and evaluating the evidence of our focused attention. It is not, however, identical to problem solving. It is not simply a question of lining up the pros and cons concerning a particular decision we must make and then judging which choice is feasible or determining which gains the most support or which will benefit us, or others, in the long run.

"Discernment is more like the turning of the sunflower to the sun, or the intuitive hunch of the scientist seeking new and creating solutions for unexplainable, contradictory observations, or the restless seeking of a heart longing to find its way home to an estranged lover, or the artistry of the musician, sculptor, or choreographer delineating in sound, stone, or the human body the emergent, self-propellant, rightful line that says, 'yes.''


"Discernment is about feeling texture, assessing weight, watching the plumb line, listening for overtones, searching for shards, feeling the quickening, surrendering to love. It is being grasped in the Spirit's arms and led in the rhythms of an unknown dance."

Email ThisBlogThis!Share to TwitterShare to FacebookShare to Pinterest
Labels: discernment 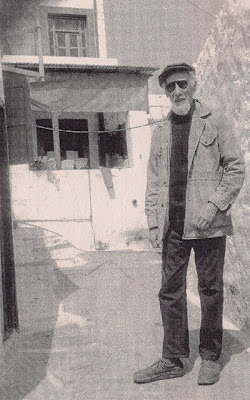 Robert Lax, Photo by Hartmut Geerken
This seems to be Lax's version of Merton's I don't know where I'm going prayer.  I just discovered it yesterday in Murray Bodo's book, "Mystics: Ten Who Show Us the Ways of God".


I am here for you.  I have no other person to be here for and no other reason to be here.  I am here at your disposal.  Your disposition.  I have no desire except to do what you'd have me do.  I have heard of other desires.  I haven't heard of any that mean as much to me as that.  Haven't heard of any that would mean as much to me as knowing I was doing what you wanted me to do.  Or even not knowing I was doing it.  Simply doing it.

Why would I wish so much to do what you'd want me to?  Only because I think I was made for that purpose.  To listen & do.  To get my mind clear enough to listen & do then do what I hear I should do.  How do I know that the voice I'd hear would be yours?  How can I know that the thing I should do is a good one?

I'm not sure if the angel is part of the gravesite or not.  When I was there last year I did not notice the angel, but I've seen other photos of Lax's final resting place which include it.  It seems like it serendipitously is supposed to be there.
at December 21, 2011 4 comments: 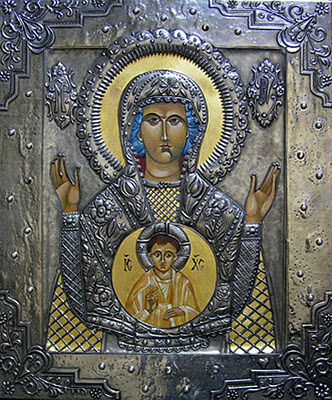 And far beneath the movement of this silent cataclysm Mary slept in the infinite tranquility of God, and God was a child curled up who slept in her and her veins were flooded with His wisdom which is night, which is starlight, which is silence.  And her whole being was embraced in Him whom she embraced and they became tremendous silence.

Mary of the Sign, one of the oldest images of Mary with Christ standing in an orb, pressed to her interior.  She experiences Christ in His Essence, in her being; they are inseparable.

Mary stands square to the viewer, her poised stillness or silent constant prayer is noted in the hands, palms extended outward in total surrender to what has been given. Mary clutches and yearns for nothing. In early icons Mary was portrayed as the Burning Bush and Christ the fire that burns within. She is represented as the divine vessel of burning love. She knows and loves Him even before His birth.

The orb containing this revelation rests within her being, Christ surrounded in gold, symbolizing the totality of god without image. Christ is holding a tiny scroll, a symbol of the Scripture being fulfilled in Him and later to be filled in each and every one of us. Christ is our interior teacher, guide master, and rabbi. The icon’s theology is the link between the Jewish tradition and the new understanding of Christ.

“The Lord Himself will give you a sign, behold a young woman shall conceive and bear a child and his name will be emmanuel.” - ISaIaH 7:14.