"How I Pray is Breath" (Merton on Zen) 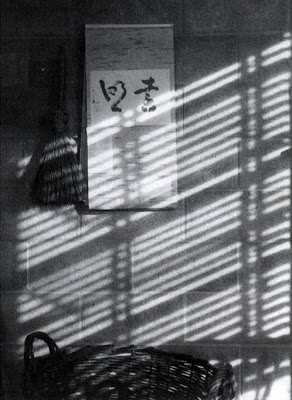 Photo by Thomas Merton
[Through the early 1960s, Suzuki sent Merton annual illustrated calendars featuring images by the 18th century Zen priest and artist, Sengai. Suzuki printed commentary on each image, which made the calendar a book about the substance and style of Zen. Photographs of the interior of Merton’s hermitage show that the Sengai calendar had a place of pride.]

In the years following Merton’s letter of introduction to D.T. Suzuki, he would become one of the keenest students of Zen in the West. He published essays on Zen topics in a variety of journals.

“But more importantly still, Zen became a force in his life. It was a touchstone of truth, a code for consciousness, a description of the depths of reality and human nature, a way of being in Nature, a new kind of paradoxical wit and humor, a finger pointing not just at the moon but at a universe of meaning - it was all these things and more.”

“There are times when one has to cut right through all he knows and the Zen view of things is a good clean blade.”

Merton did not receive any formal instruction in Zen, his sangha were his brothers at Gethsemane. But his Christian practice of contemplative prayer had created layers of kinship and receptivity:

“What is really meant ... is continual openness to God, attentiveness, listening, disposability, etc. In terms of Zen, it is not awareness of but simple awareness.”

- Merton letter to a woman religious, March 27, 1968, Witness to Freedom: The Letters of Thomas Merton in Times of Crisis, edited by William Shannon, p. 197