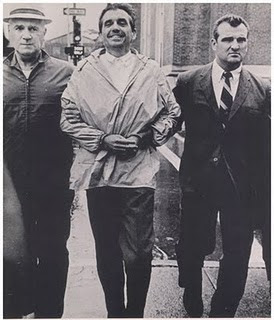 I came across this photo of Dan Berrigan via a louie reader.  His comment: Who is really more free - D.B. or the sour faced g-men?

This photo definitely needs to be part of the louie collection! My guess is that this is the photo taken (August 12, 1970) when Berrigan was arrested after being "underground", hiding from the F.B.I for his part in the Cantonsville Nine action.  For several months Berrigan was in the home of Robert Coles in Cambridge.  He was finally caught on Block Island:

"Two F.B.I. agents attempting to disguise themselves as birders finally caught up with Berrigan, however, when he was staying in the home on Block Island, R.I., of the social activist and lay theologian William Stringfellow. “One day, Bill looked out the window and saw two men with binoculars acting as if they were bird watchers,” said Berrigan, “but since the weather was stormy, that seemed strange. ‘I think something’s up,’ Bill said, and sure enough they knocked on the door.” They took Berrigan back to Providence by ferry; the media, already alerted, were waiting at the pier. Berrigan showed me a poster in his apartment made from a photo taken at that moment. Smiling broadly, he was in handcuffs between two burly F.B.I. agents as they escorted him off the ferry. A reminder of Block Island lies on his living room floor: a dozen curiously shaped stones from the beach there. " - from an article in America Magazine by George Anderson, "Looking Back in Gratitude - a conversation with Daniel Berrigan", July 6, 2009

(louie-louie is going to kick back into gear soon, I promise.  I've been mulling over the relationship between art and contemplative-ness, lately, and can't quite come to a blog-way of putting it down.)
at June 06, 2010