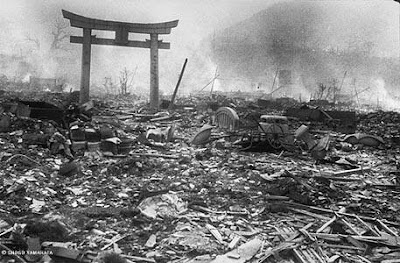 Today is the 68th anniversary of the bombing of Hiroshima.

August 6 - Sixty-eight years ago on August 6th, the U.S. unleashed the atomic bomb over the city of Hiroshima. Hundreds of thousands of people died from the blast itself and radiation sickness over the next years.This is also the Christian feast day of the Transfiguration of Christ - when our Lord appeared in His divine glory before the Apostles Peter, James, and John. His face shone like the sun, and His garments became glistening white.

Poet-monk, Thomas Merton, wrote a poem, “Original Child Bomb,” the title being an exact translation of the Japanese word for the bomb that dropped on Hiroshima onAugust 6, 1945.


"The bombing of Hiroshima and the Feast of the Transfiguration"