Today (January 1, 2019) NASA’s New Horizons probe will pass near a mysterious object in the Kuiper belt, making it the most distant world ever visited by a spacecraft. Scientists hope to learn more about how the solar system formed as they study Ultima Thule. Read more about why the New Horizons flyby portends a new age of planetary discovery in the New York Times here. 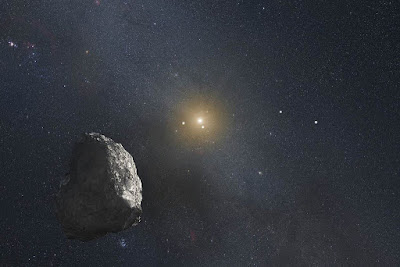 An artist’s rendering of a Kuiper belt object, four billion miles from the sun.

Now, in the middle of the limpid evening,
The moon speaks clearly to the hill,
The wheat fields make their simple music,
Praise the quiet sky.

And down the road, the way the stars come home,
The cries of children
Play on the empty air, a mile or more,
And fall on our deserted hearing,
Clear as water.

They say the sky is made of glass,
They say the smiling moon's a bride.
They say they love the orchards and apple trees,
The trees, their innocent sisters, dressed in blossoms,
Still wearing, in the blurring dusk,
While dresses from that morning's first communion.

And, where blue heaven's fading fire last shines
They name the new come planets
With words that flower
On little voices, light as stems of lilies.

And where blue heaven's fading fire last shines,
Reflected in the poplar's ripple,
One little, wakeful bird
Sings like a shower.