"This is the picture of an adult politician in a not very adult world." (Dag Hammarskjöld) 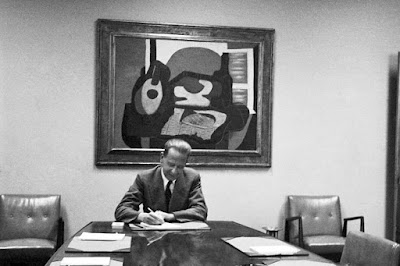 Hammarskjöld in his private office at UN headquarters, 1 March 1954 (UN Photo/MB)
Behind him, a canvas by Picasso on loan from the Museum of Modern Art. In a talk at the museum that year, Hammarskjöld spoke of “art which reflects the inner problems of our generation and is created in the hope of meeting some of its basic needs” (Public Papers 2, 372‒73).

Some thoughts of Dr. Rowan Williams in a New York Times article - OUR COMPASS. Focusing on Hammarskjold, Dr. Williams described him as "an adult in a not very adult world".


Dag Hammarskjold, the second secretary general of the United Nations, represented a coming together of the active and the contemplative. He recognized that public office is not about anxiously conserving status or winning arguments. He was sharply aware of the shadows in his own motivation, and confronted them patiently and remorselessly in his private writing. He expected others to share his own careful self-reflection, and used the platform of the office of secretary general to prompt this sort of questioning. And he kept his own spiritual discipline alive in the most demanding circumstances, while maintaining strict public discretion: he did not need to flaunt his religious commitment to win public applause.

This is the picture of an adult politician in a not very adult world. One could say that he expected too much of professional politicians and all those whose job it was to defend local interests. But he offered a perspective without which all politics is empty. His work and words declare that it is possible to see the world with what could best be called creative detachment, and without self-pity.

Contemplating Hammarskjold’s life, I am left with two uncomfortable thoughts. The first is that this is what I should have been trying to realize in my own ventures into public life, and how profoundly I didn’t manage it. The second: a truly terrifying amount of public rhetoric assumes that we are both incapable and frightened of this level of honesty of seeing, speaking and feeling. Yet in private, most of us are capable of seeing at least something of this, and acting on it. Why is our public language so corrupt and corrupting?

Rowan Williams — Formerly the 104th Archbishop of Canterbury, now chancellor of the University of South Wales.
at September 03, 2016