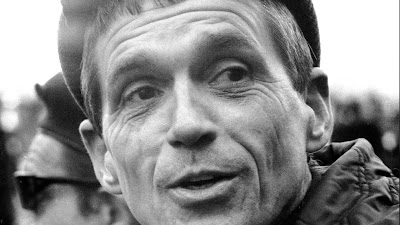 "Uncle Dan was a priest.  He left home at the age of 13 to join the Jesuits, was ordained with his class, and is now buried in a Jesuit cemetery in Auriesville, NY.  He told someone once that in walking the streets of New York the faces of passersby were as the beads of the Rosary to him, a prayer for each one, a moment to ponder the mysteries each person bore, sorrowful and joyful and glorious mysteries.


"All life is sacred, he believed, because life is created by God.  Humanity, this marvelous, fascinating tapestry of similarity and difference.  If life is threatened or taken by human design, if people are robbed of their dignity, this becomes a major problem for Uncle Dan.  His basic theology was that all Christians will try to protect the weak and work for justice and oppose war. ...
"He remained a priest.  I have felt the presence of God, on occasion.  He lived and breathed with God and reported back to the rest of us.  His words, and the congruence between his words and his deeds, rang true to many of us, and there was great beauty in what he said, and so we were brought along, headlong into traffic and other dangerous situations.
"He believed it, he lived it, God was real to him, the stories in the Book were real to him.  The Bible was a work of drama to him in that it was a script for actors.  We are to practice incarnation, which means to make the word flesh.  We are to live it.  If we do, it is alive and real.  If we don’t, it dies among so many hollow words and empty rituals."
at October 19, 2016