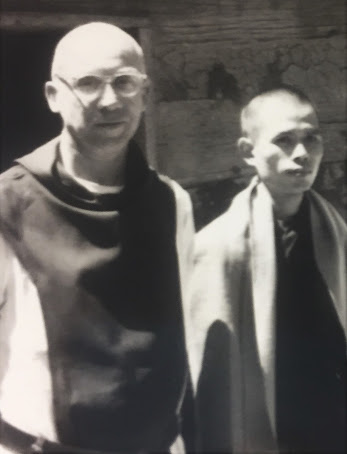 So many of my teachers connect to each other, going way back. It must be a wavelength that we find and recognize in each other, and then ride it together.

"... One of the persons Nhat Hanh had long hoped to meet while in the United States was Thomas Merton, the Trappist monk whose widely read books had done so much to revitalize contemplative spirituality. Merton was by then also known for his opposition to the war and also for his deep respect for Buddhism. In late May 1966, Merton welcomed Nhat Hanh, plus John Heidbrink of the Fellowship of Reconciliation staff, to the Abbey of Our Lady of Gethsemani in Kentucky for a two-day visit.

The two monks stayed up late into the night in Merton’s hermitage, sharing the chants of their respective traditions, discussing methods of prayer and meditation, comparing Christian and Buddhist aspects of monastic formation, and talking about the war.

Afterward, Merton said to his fellow Trappists, “Thich Nhat Hanh is a perfectly formed monk,” and that he regarded his guest’s arrival as an answer to a prayer. “In meeting Thich Nhat Hanh,” Merton said, “I felt I had met Vietnam.” Merton also wrote of their visit, calling Nhat Hanh his brother: “He is more my brother than many who are nearer to me in race and nationality, because he and I see things exactly the same way.”

From the NY Times:

“People talk about entering nirvana, but we are already there,” said the Buddhist monk, who died on Saturday. Here is a short selection of his remarks.

This body is not me. I am not limited by this body.
I am life without boundaries.
I have never been born,
And I have never died.