A dreadful hatred of life 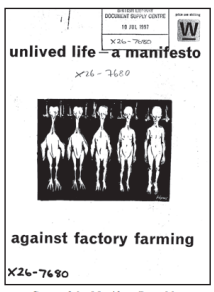 cover of the Manifesto pamphlet
On this Earth Day, I post a Merton writing that was never published in America, indeed not much known about. It appeared in a small pamphlet published in England in the summer of 1966.

A STATEMENT ON FACTORY FARMING:

Since factory farming exerts a violent and unnatural force upon the living organisms of animals and birds, in order to increase production and profits, and since it involves callous and cruel exploitation of life, with implicit contempt for nature and for life, I must join the protest which is being uttered against it. It does not seem that these methods have any really justifiable purpose except to increase the quantity of production at the expense of quality: if that can be called a justifiable purpose. However, this is only one aspect of a more general phenomenon: the increasingly destructive and irrational behaviour of technological man. Our society seems to be more and more oriented to overproduction, to waste, and finally to production for destruction. Its orientation to global war is the culminating absurdity of its inner logic, or lack of logic. The mistreatment of animals in “intensive husbandry” is the part of this larger picture of insensitivity to genuine values and indeed to humanity and to life itself – a picture which more and more comes to display the ugly lineaments of what can only be called by its right name: barbarism.

Monica Weiss SSJ, unearths the origins and context of this writing in an article in The Merton Seasonal HERE. Monica is the author of the forthcoming book, The Environmental Vision of Thomas Merton.

"Here once again, Thomas Merton is in the forefront of eco-justice, encouraging us to develop an ecological consciousness. How is it that Merton, with his propensity for contemplation and the hermit life, can envision the negative ramifications of apparently salvific and cutting-edge human activity? If ever we doubted that Merton was ahead of his time or supposed that he was prophetic only on the dangers of nuclear war, this issue of factory farming should dispel any doubt." - Monica Weiss SSJ