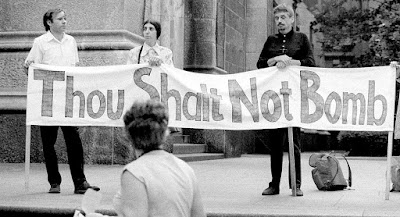 At Play in the Lions’ Den: A Biography and Memoir of Daniel Berrigan
by Jim Forest
Orbis Books, Maryknoll, New York 2017

In his compelling portrait of Daniel Berrigan, Jim Forest has given us a wonderful gift. He captures the amazing grace of Berrigan’s remarkable life as priest, poet, humanitarian, educator, anti-war activist and modern-day prophet. I could not put this book down.

Forest spent time with Berrigan as a young man and kept in touch with him over the years after he moved to the Netherlands where Dan visited him and his family. Theirs was a close bond. Consequently, his knowledge is firsthand. He succeeds in capturing the essence of Berrigan—his intellect, his humor, his compassion, his love for his community of Jesuits and his profound sense of humanity.

Unknown to most is that Berrigan was also the silent doer of daily works of mercy such as caring for the homeless, the dying and those suffering from AIDS when the epidemic first surfaced in 1984 — and when AIDS victims were shunned by society and blamed for their illness. Berrigan embraced them all and did not talk about it.

We find that Berrigan did not progress easily from acts of civil disobedience to acts of violence against military or government property. He was torn between his brother Philip who argued that petitionary nonviolence and civil acts of disobedience in protesting the Vietnam War were not working and that militant nonviolence was necessary and his close friend the Trappist monk Thomas Merton who argued against it. Gradually, he came to agree with Philip and together they began burning draft files and pouring their own blood on the files and drawing sometimes lengthy prison sentences.

Dorothy Day was also a strong influence and mentor. In the March 1965 issue of The Catholic Worker, she published Dan Berrigan’s first anti-war speech on the front page. Berrigan paid a high price for his militant acts of civil disobedience. He was often scorned and ostracized by his own community and on one occasion locked out of his residence, his belongings tossed outside on the steps. After giving a talk in support of Roger LaPorte, a former seminarian who immolated himself in front of the United Nations building protesting the Vietnam War, Berrigan was exiled by the Jesuits to South America — and returned only because of the huge public outcry and only on his stipulation that he be allowed to continue his peace work.

In all his university teaching positions he encouraged student activism and posed provocative questions to the University such as, “How did Cornell treat the migrant workers the University employed in its orchards?” and “What about its investment portfolios — segments of which connected Cornell to the military-industrial complex and the war in Vietnam.”

With a hundred of his Cornell University students he was arrested for the first time in 1967 at midnight on the steps of the Pentagon for protesting the Vietnam War. Reflecting on this he said, “For the first time, I put on the prison blue jeans and denim shirt, clerical attire I highly recommend for the new church.”

In 1975 he led a retreat on peace and reconciliation in Ireland and met with some members of the Irish Republican Army and was later criticized for being sympathetic to them. Even though he did not believe in taking even one life, he developed a rapport with their leader. When Hunger Striker Bobby Sands was on his deathbed, he was asked if he had one last wish before dying. He answered, “I would like to meet Father Berrigan.” With former US Attorney General Ramsey Clark, Berrigan flew to Belfast only to learn that Prime Minister Margaret Thatcher ruled that neither Dan nor Ramsey were allowed entrance. They stood vigil outside the prison as Bobby Sands slowly died.

Arrested more than 250 times,  he was noce on the FBI’s Most Wanted List. For four months led the FBI on a wild goose chase evading them until he was captured at a friend’s house on Block Island. In a particular daring escape after giving a talk at Cornell University and with agents from the FBI in attendance—after the lights dimmed he slipped into a costume of burlap sacking with a papier-maché head and aided by the Bread and Puppet Theater was whisked out into a waiting van and sped away. In an Oval Office conversation former President Nixon’s Chief of Staff Bob Haldeman wonders out loud where the Berrigans get their money for legal defense, Nixon responds, “They’ve got millions.”

Dan Berrigan died on April 30, 2016 — nine days before his 95th birthday. At his concelebrated Mass of the Resurrection, more than one thousand people attended. The homily was given by his friend and fellow Jesuit Stephen Kelly who opened with a greeting to the FBI, “We may let members of the FBI assigned here today know that it is Daniel Berrigan’s Funeral Mass of the Resurrection, so they can complete and perhaps close their files.”

In an interview with this writer in his apartment in New York in 2008, Daniel Berrigan said he entered the Jesuits at the age of eighteen because of its Spartan no-frills appeal when other orders were sending him literature featuring tennis courts and swimming pools and a more luxurious life. He stayed this way all his life. He gave away all his earnings from books and speaking engagements to the poor and others in need.

As his niece Frida Berrigan told a New York Times reporter on his death, “Dan owned nothing. He carried nothing. Whenever I traveled with him, he’d bring the little backpack of nothing. I’d pick him up and ask, ‘Is that all you have?’ He’d say, ‘Yes, that’s it. Let’s go.’” The final incantation of Father Kelly’s homily on Daniel Berrigan concluded with this…. that in his opinion… “Dan belonged among the Doctors of the Church.”