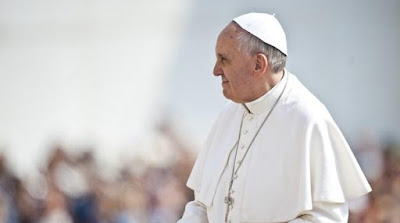 "In moments of darkness and great tribulation, when the knots and the tangles cannot be untangled or straightened out, nor things be clarified, then we have to be silent. The meekness of silence will show us to be even weaker, and so it will be the devil who, emboldened, comes into the light, and shows us his true intentions, no longer disguised as an angel but unmasked." - Jorge Bergoglio 1990 essay, ‘Silencio y Palabra’ (‘Silence and Word’ (Pope Francis)

There is so much wisdom in this.

On Sunday 26 August during a 45-minute press conference in flight to Rome from Dublin, Pope Francis told journalists that he would not "say a single word" about the incendiary statement made by Archbishop Vigano asking for him to resign in disgrace because of his complicity with sex-abuse coverup.

Francis had faced ferocious accusations of complicity with evil before. He faced it with silence.

Austen Ivereigh, Catholic author and biographer of Pope Francis, describes this time in the life of Jorge Bergoglio and how he worked his way through it, in an excellent essay (HERE).

Bergoglio’s 1990 essay, ‘Silence and Word’, suggests a deeper spiritual purpose to his silence, one drawn from a meditation on the Passion in the Third Week of the Spiritual Exercises. There St Ignatius describes how in the Passion, God ‘goes into hiding’, concealing, as it were, his divinity.

This is a very different kind of silence from, say, the silence of complicity or the silence of inaction faced with evidence of evil, as we have seen too often in the case of sexual abuse of minors.

The purpose of Christ’s self-emptying silence — his meekness faced with ferocious hostility — is to create space for God to act. This kind of silence involves a deliberate choice not to respond with an intellectual or reasoned self-defence, which in a context of confusion, of claims and counter-claims and half-truths, simply fuels the cycle of hysterical accusation and counter-accusation. It is a spiritual strategy to force the spirits behind the attack to reveal themselves.

To ‘make space for God’ can only be done in the way that Jesus himself taught: through the kenosis (self-emptying) described in St Ignatius’s ‘third kind of humility’ (Spiritual Exercises §167): ‘I want and choose poverty with Christ poor rather than wealth, and humiliations with Christ humiliated rather than fame …’

The effect of this humility, Bergoglio notes in ‘Silence and Word’, is to provoke an increase in the ferocity, because people are attacked more when they are weak. (Thus, he points out, Jesus wasn’t ferociously attacked while he was seen as strong — when people followed him, and believed in him — but only after he had been ‘weakened’ in the sight of others by betrayal.)

Gradually, the rage will begin to focus on a single person. ‘At the root of all ferocious attack is the need for people to offload their own guilt and limitations’, notes Bergoglio, adding that Jesus, as a living reproach, is scapegoated: ‘all the evils are offloaded onto the person we are ferociously attacking’.

As Jesus is steadily weakened — the disciples flee, Peter denies him, and he is left alone on the Cross — the devil reveals himself, believing that he has won. Christ’s weakness is the bait he swallows.