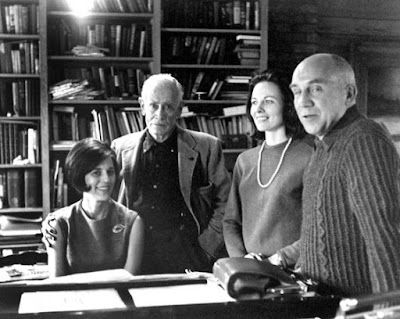 "In 1908 my father had in his employ a Negro ditch-digger known as Objerall Jacket. As he dug, he sang, "Go way from my window, go way from my door" -- just those words, over and over again, on two notes. Working beside Jacket all day (I was sixteen at the time), I decided that something had to be done. The results were a four-verse song dedicated to a blue-eyes, blond girl, who didn't think much of my efforts. The song lay fallow from 1908 to 1929, when I arranged it and transposed to a higher key. "Go 'way from My Window" was was first sung successfully in Berlin, Germany, in 1930. It has gone a long way since."

Niles' last work (1972) was the Niles-Merton song cycles, settings of some poems of Thomas Merton.

Niles and Merton met via mutual friends - Victor Hammer and John Howard Griffin - and became friends. Niles was interested in setting some of Merton's poems to music. Merton said fine, and from this came the Nile-Merton Song Cycle. Most of the work was done after Merton's death in 1968.

Below is a lecture / performance of 8 of these poems at Villanova University in 2016. I've started the video at where the performance begins, skipping over the lecture.

I'm not sure that the "ballad" fits Merton's poetry, or Merton's poetry fits the ballad. It seems to me that Merton's poetry reaches for something beyond words, much like the song of the Negro ditch digger, Objerall Jacket.
at August 07, 2018